Part 1: We Arrive, and It's Amazing

Note: For anyone reading this "not in the family," it should be noted that this is a different type of trip report. Headed out with my Pops and his Jeep, there is libel to be more family ribbing than usual through parts of the report. It's all in good fun. 🙂turbodb

Our awesome trip to Idaho ended like no other trip we'd taken to date - in more ways than one. Of course, we'd found the Overland Trail, but more importantly we'd ended the trip in another state, with no pit stop at home to shower, refuel, re-provision, etc.

Instead, we ended up in California - the (north) Bay Area to be exact - for a quick shower, shopping, meal prep and to repack the truck before my Dad and I were off for another week of camping at ▮▮▮▮▮▮▮▮▮▮▮▮▮  in the Sierras.

And this wasn't just any trip - this was a trip to his favorite, secret camp spot - a place that he and his buddies have been going for more than 25 years, and which has remained largely unchanged in that time. This year, it'd be only him and one of his friends (the "old fogies"), and me; sworn to secrecy for all time.

About a 6-hour-plus-stops drive, we were ready to go early as the sun rose - both trucks packed the night before. 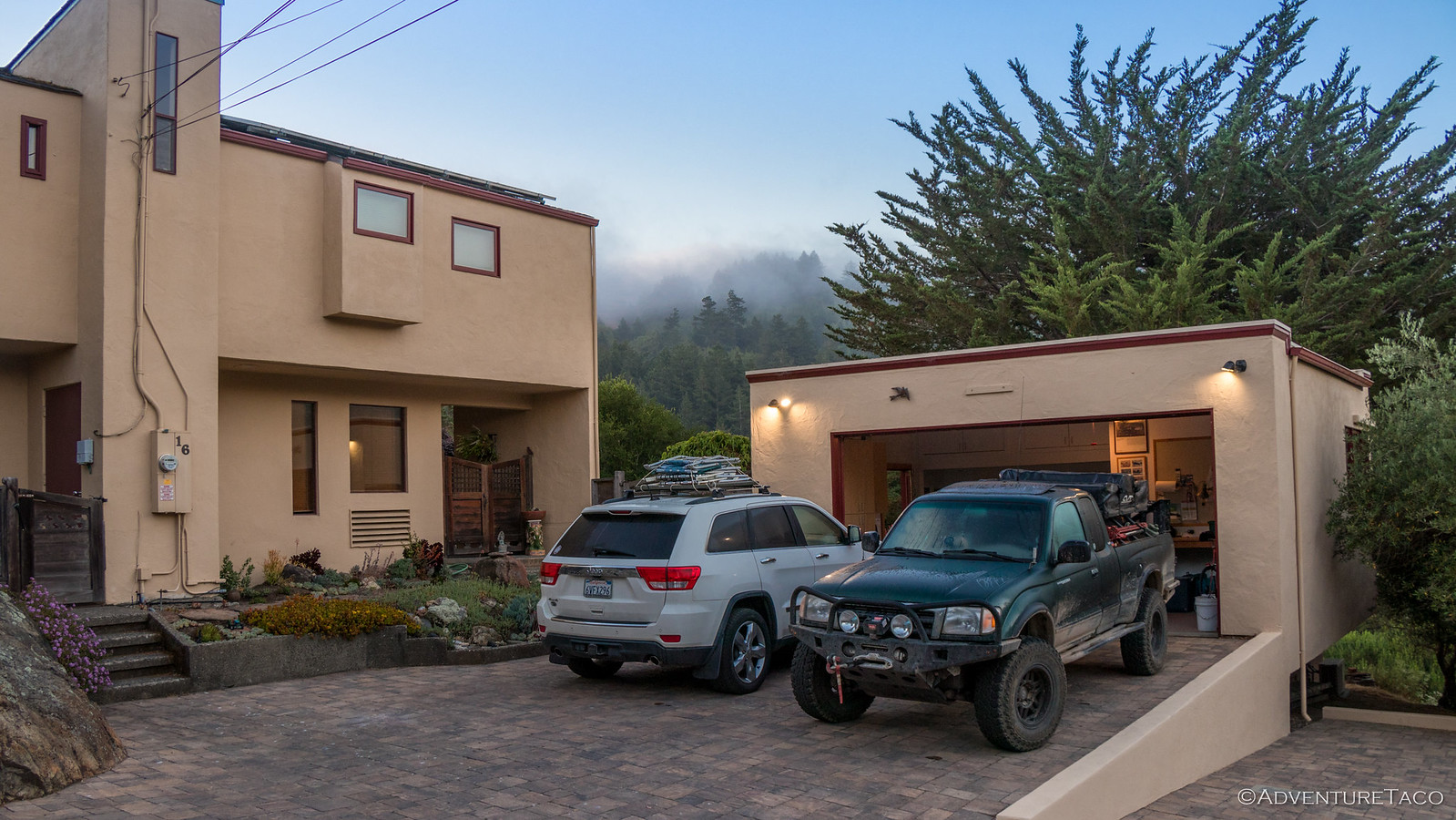 A quick stop to pick up our third man (though, let's be honest, I was the third guy) and we set our sights east and south, over bridges and through the fields - a sunny, warm California day making for a pleasant trip. 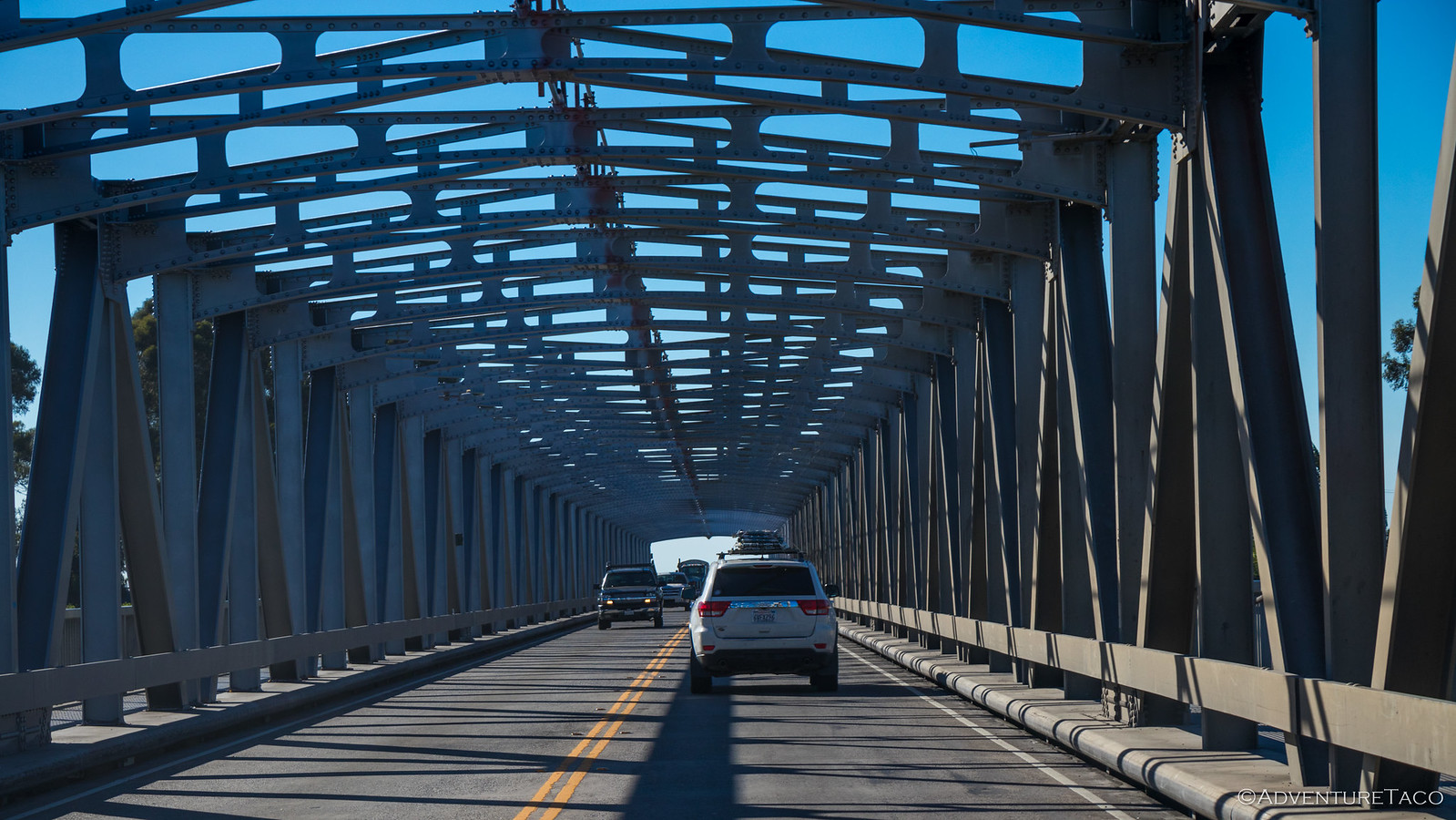 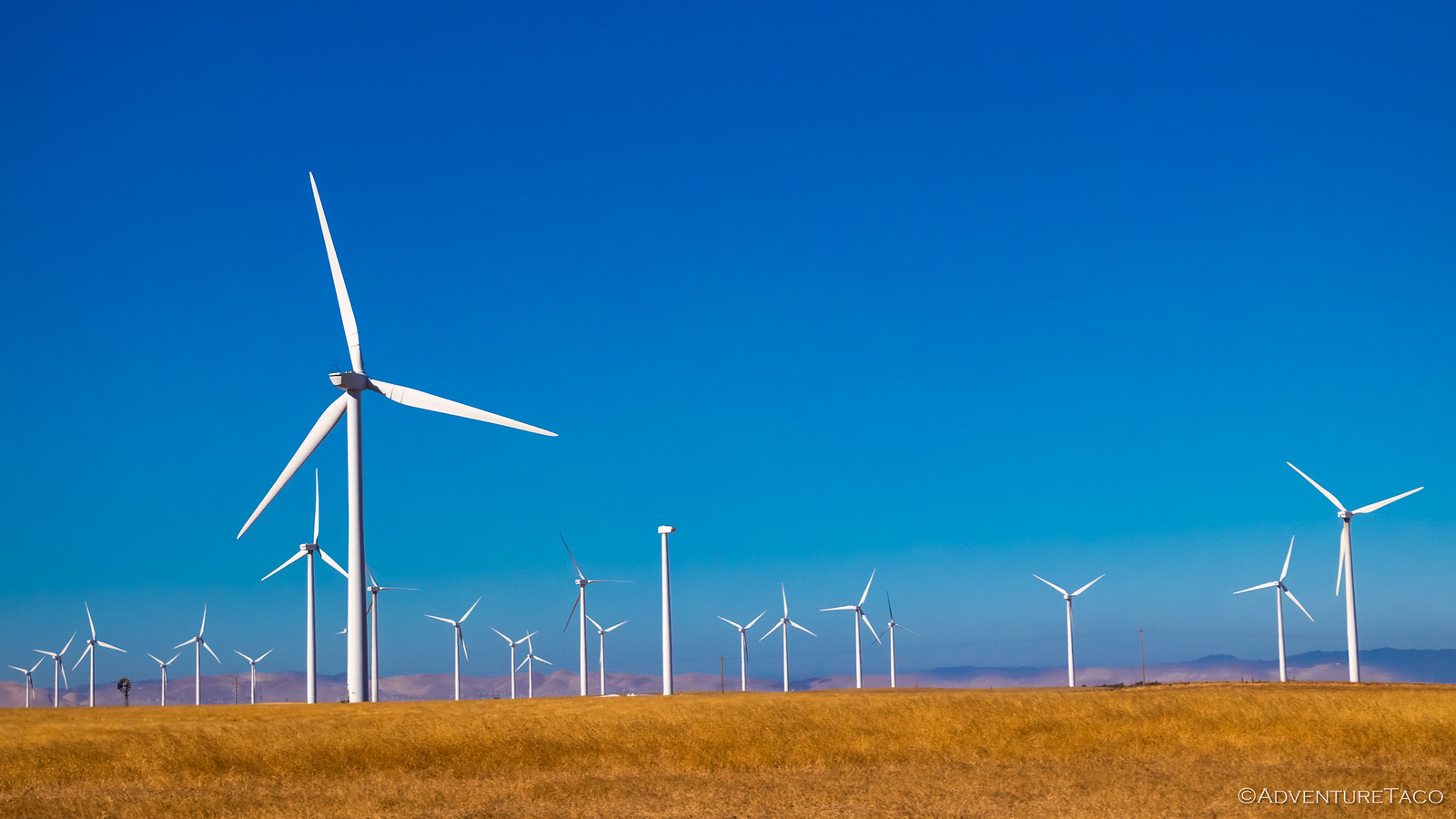 As is the case with every 25-year tradition, we stopped for fuel at the same places as always, and lunch was at the same burger joint - ▮▮▮▮▮▮▮▮▮▮▮▮▮▮▮▮▮▮ . I failed to get any photos of this place, but it's a hopping place in a small town, clearly a favorite of passers-through. The walls and ceilings are covered in old LP covers, and you can order pretty much anything you want, as long as it's essentially a burger.

Refueled, we headed out of town and in no time we were on our way into the mountains. Still on paved roads, Dad came over the radio to let me know that we were making a quick pit stop. I hadn't noticed any reason for that, but that's normal since I'm the slow one in the family. Of course, on popping out of the trucks, I snapped a quick photo. 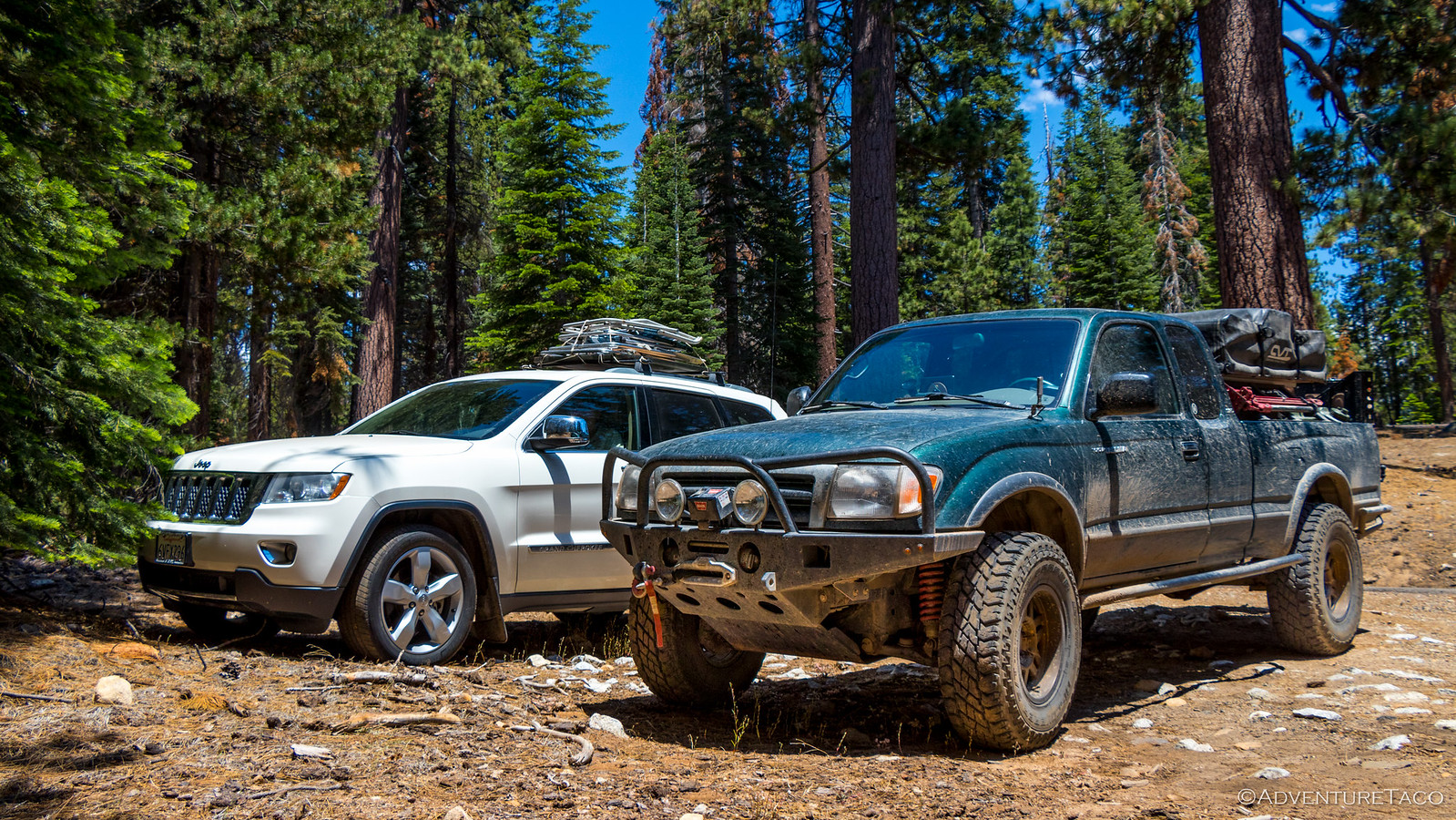 And then I saw (or more correctly was pointed to) the reason for the stop. ▮▮▮▮▮▮▮▮▮▮ . This thing is crazy - a truck-sized rock, balanced on a pedestal, eroded over the years where it stands. Definitely something you don't see every day. 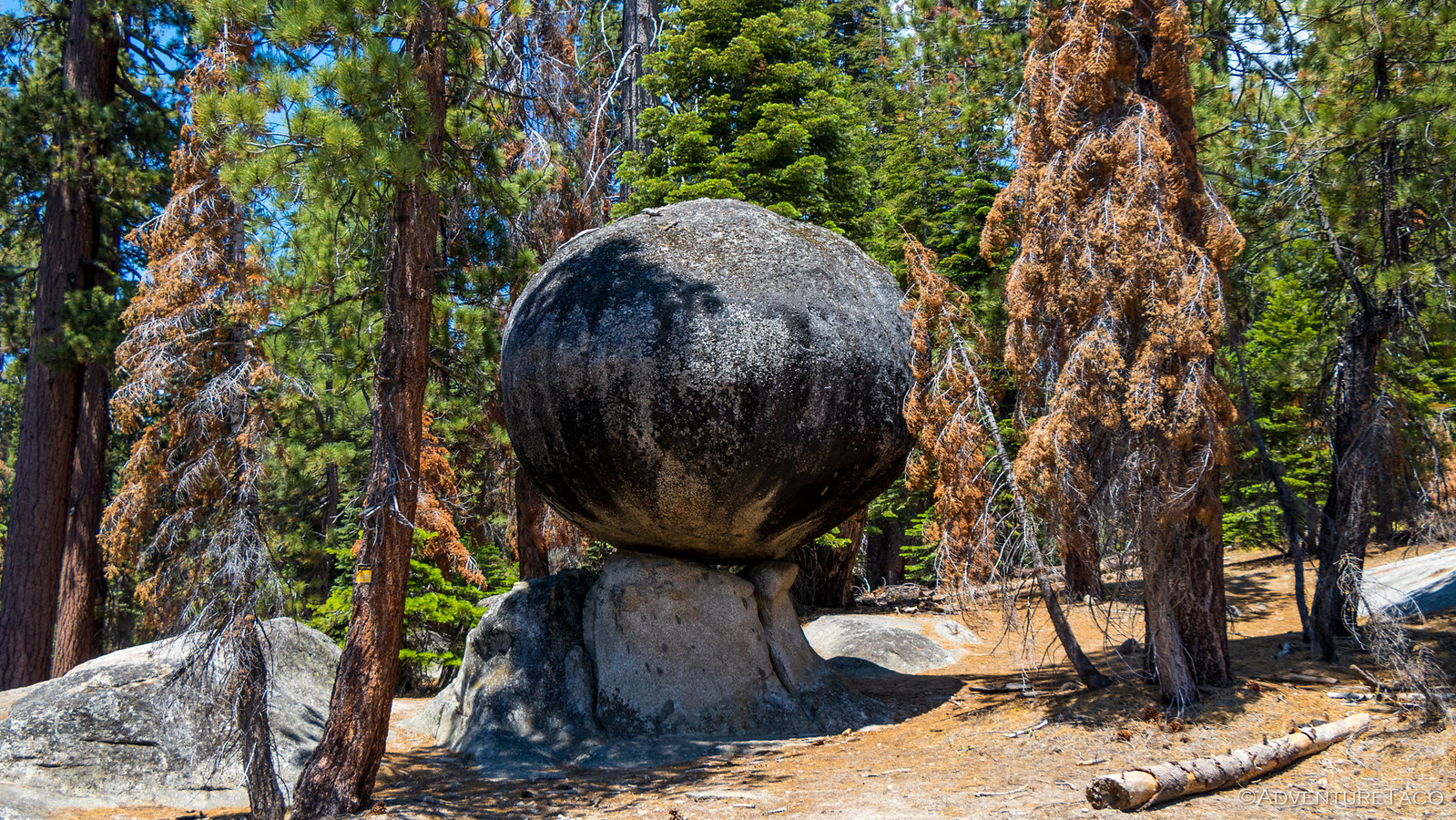 But a quick stop was all that was called for - we had a destination to get to, and no time to waste. After-all, once we got there, we had to hurry up and relax for the rest of the week! Shortly we were on dirt, well into the "secret" location. With the fogies travelling more slowly in their Jeep Grand Limo than I could go in the Tacoma, I took the opportunity to snap a few photos of the beautiful, mountainous landscape as I waited for them to make some headway up the trail. 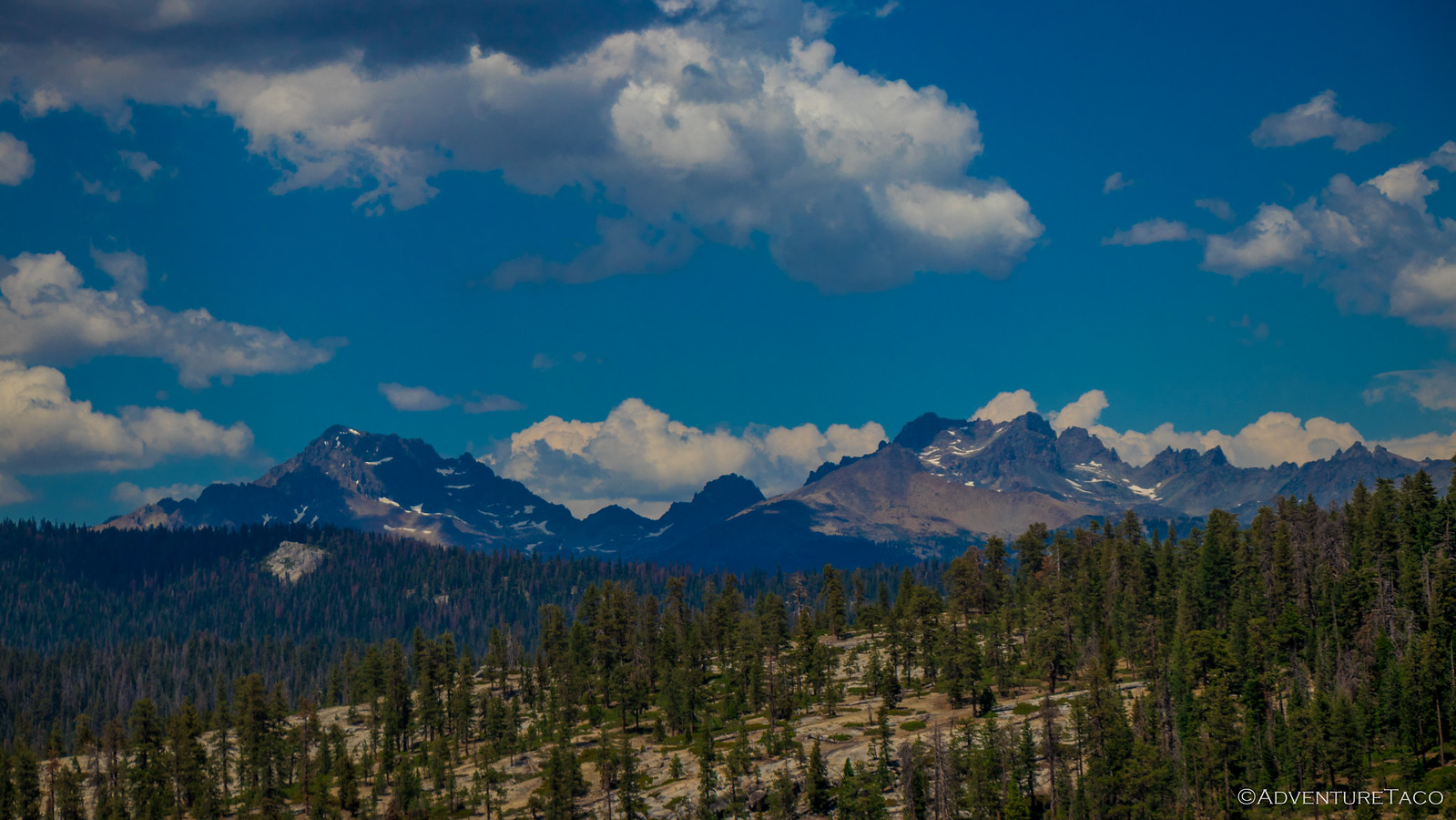 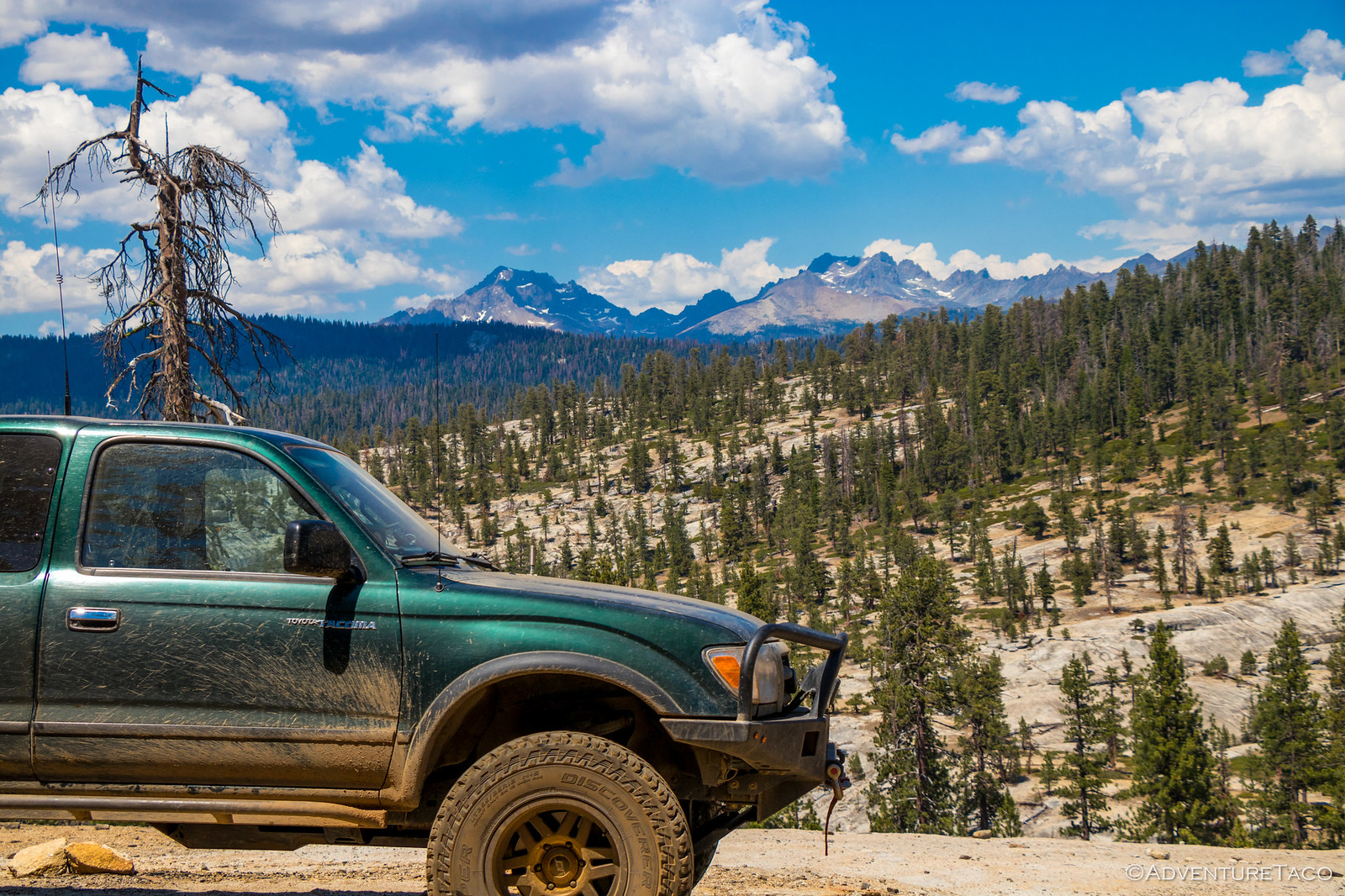 Eventually we made it to a section of trail that Dad considers a bit of a "gatekeeper" to the camp site. It's not all that rough by any stretch of the imagination, but it's also not something you'd want to take your family sedan on. Of course, the Jeep Limo is essentially a family sedan, so Dad came over the radio to let me know that he was going to, "Put it in 4Lo and raise the suspension for more ground clearance."

I found myself both laughing and jealous. Laughing for obvious reasons, and jealous because he apparently had a button in the limo that would engage a compressor that was continuously plumbed to all four corners of the Jeep. Nice.

And with that, he carried on, now noticeably higher on his 20's and street slicks. So Jeep. 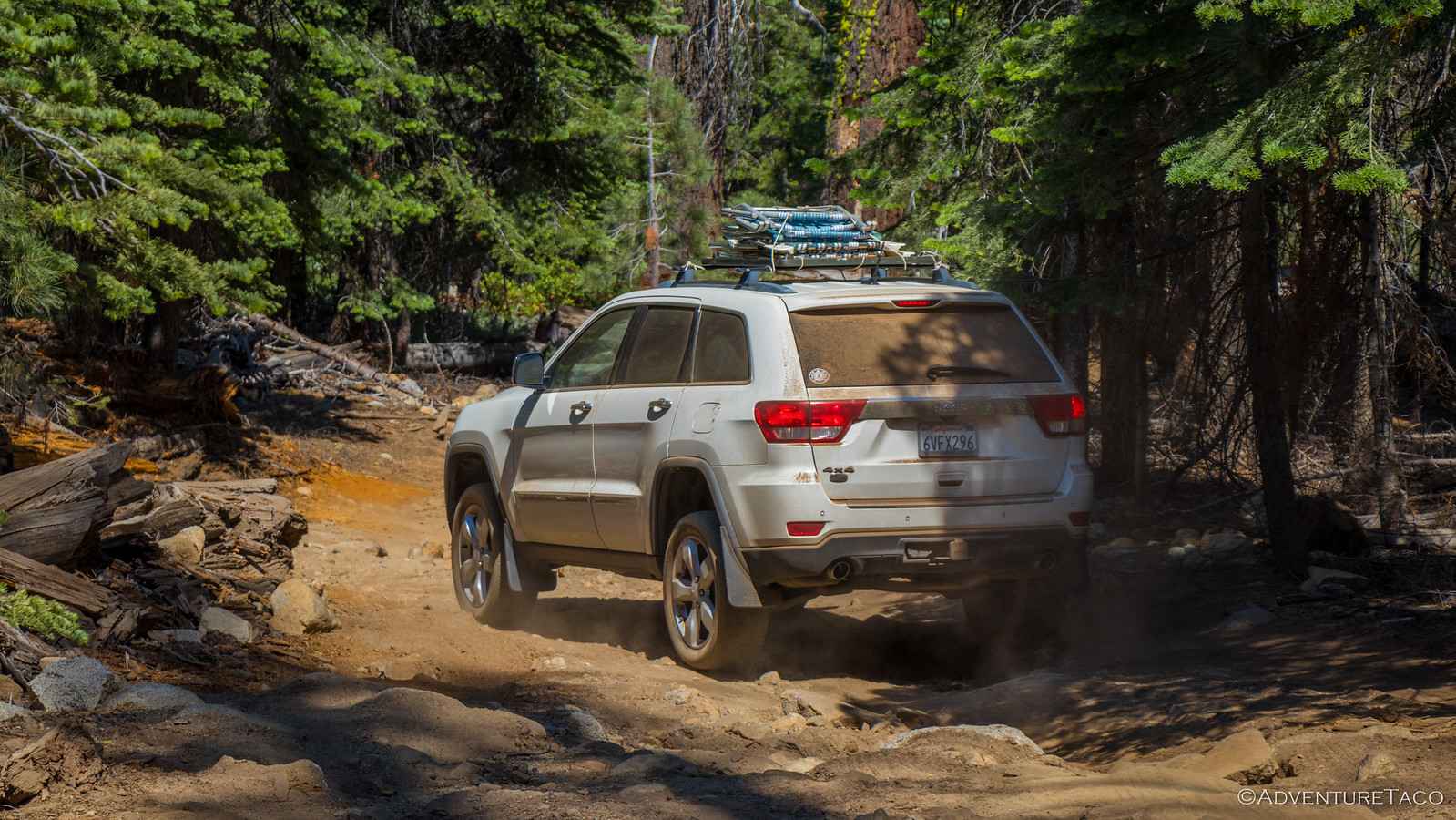 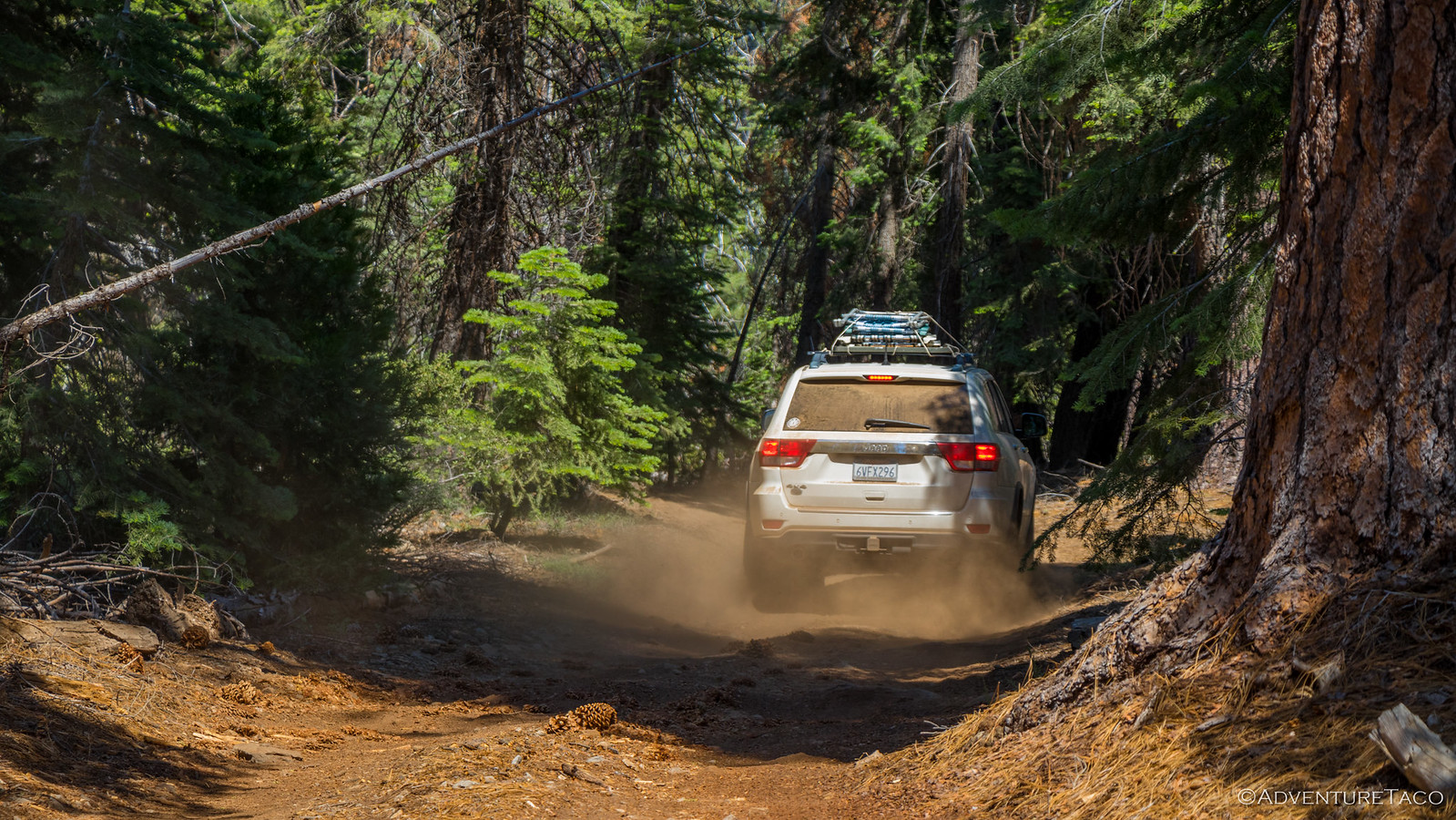 Slow going, we eventually reached camp - fine with me as there was lots of eye-candy along the way, even if the road was a bit dusty. 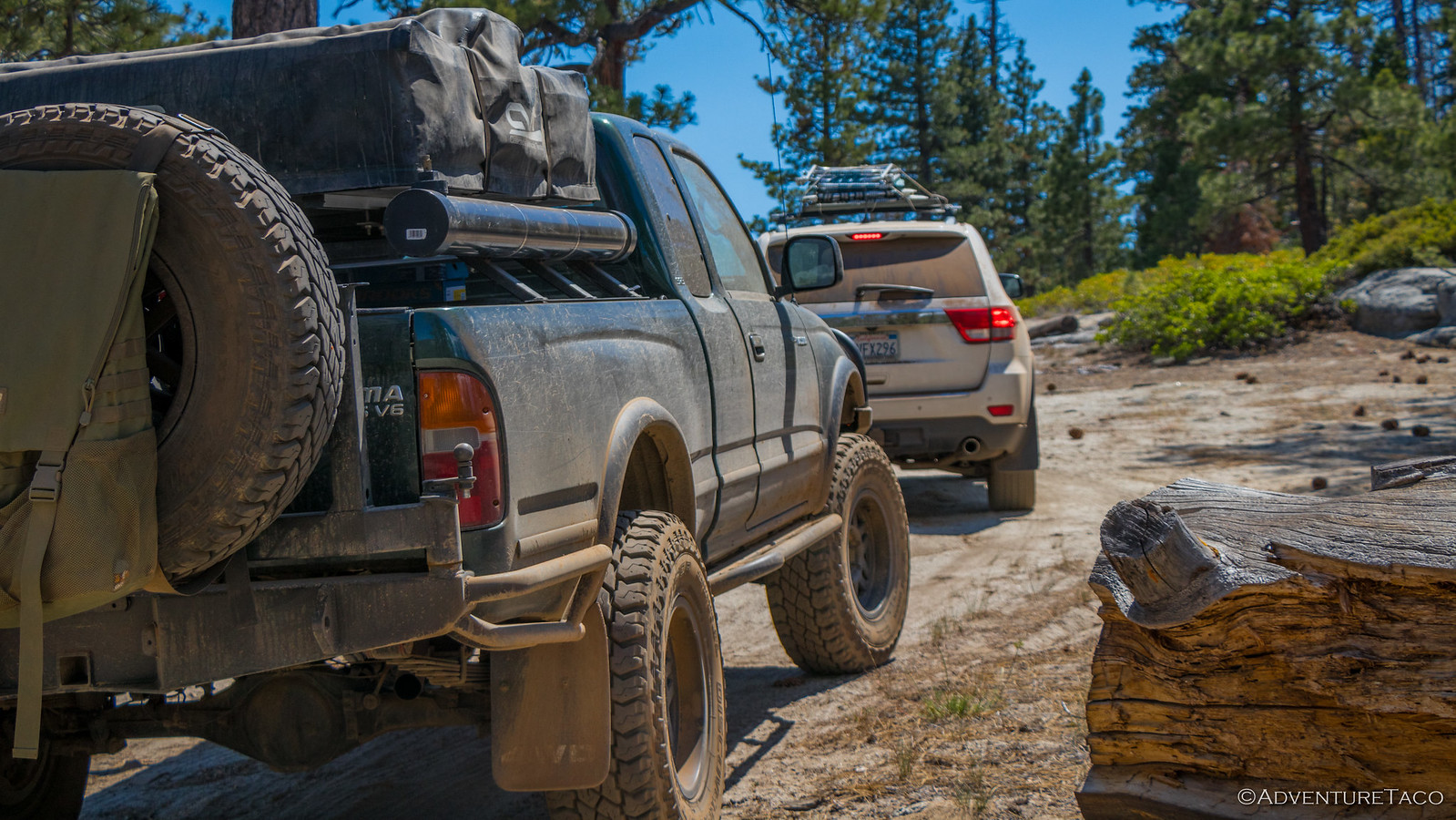 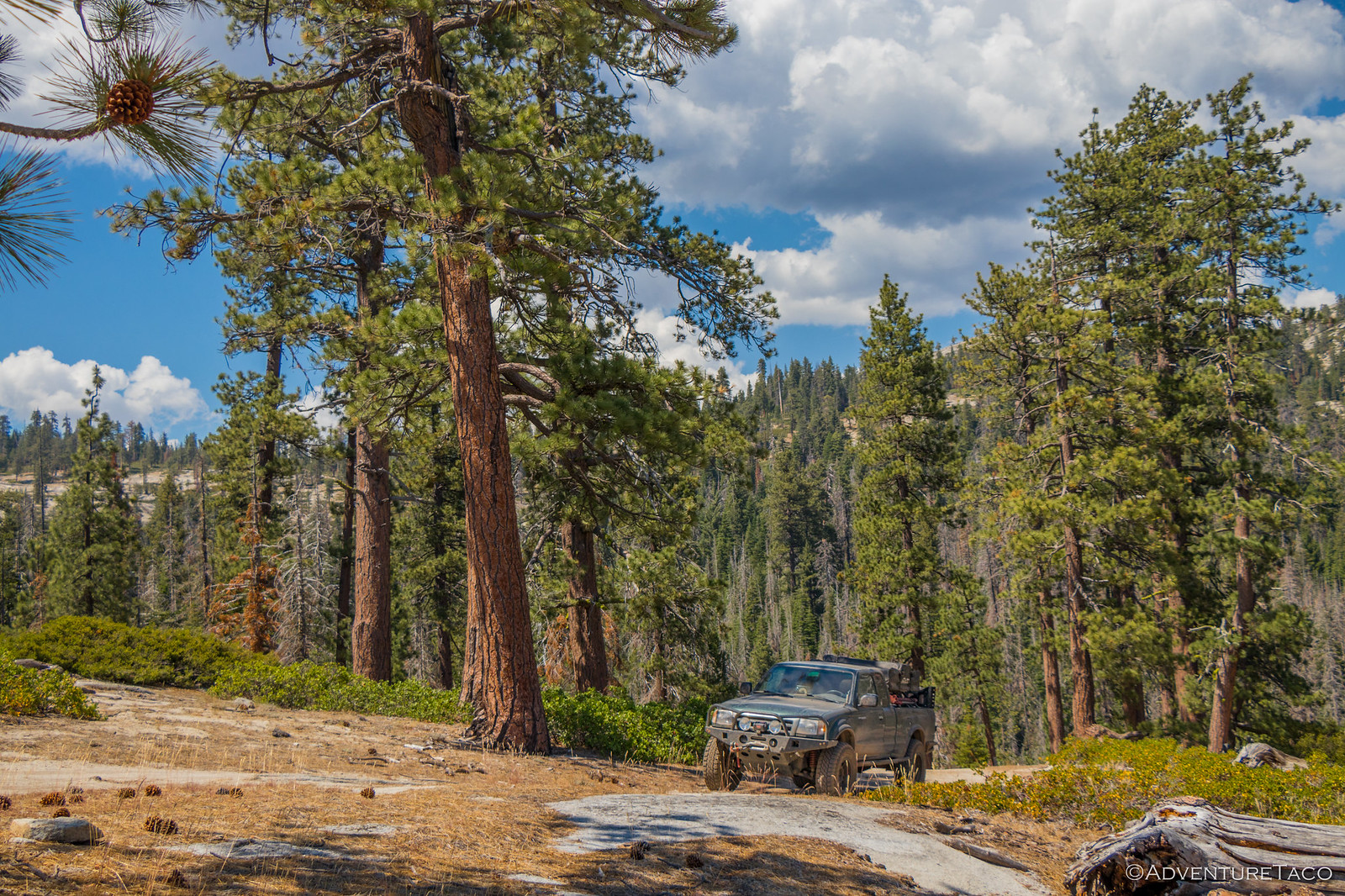 And then we rounded the corner to camp. I think I gasped out loud as I clambered for the camera. I would end up taking dozens of pictures of the views from camp, so amazing they were. 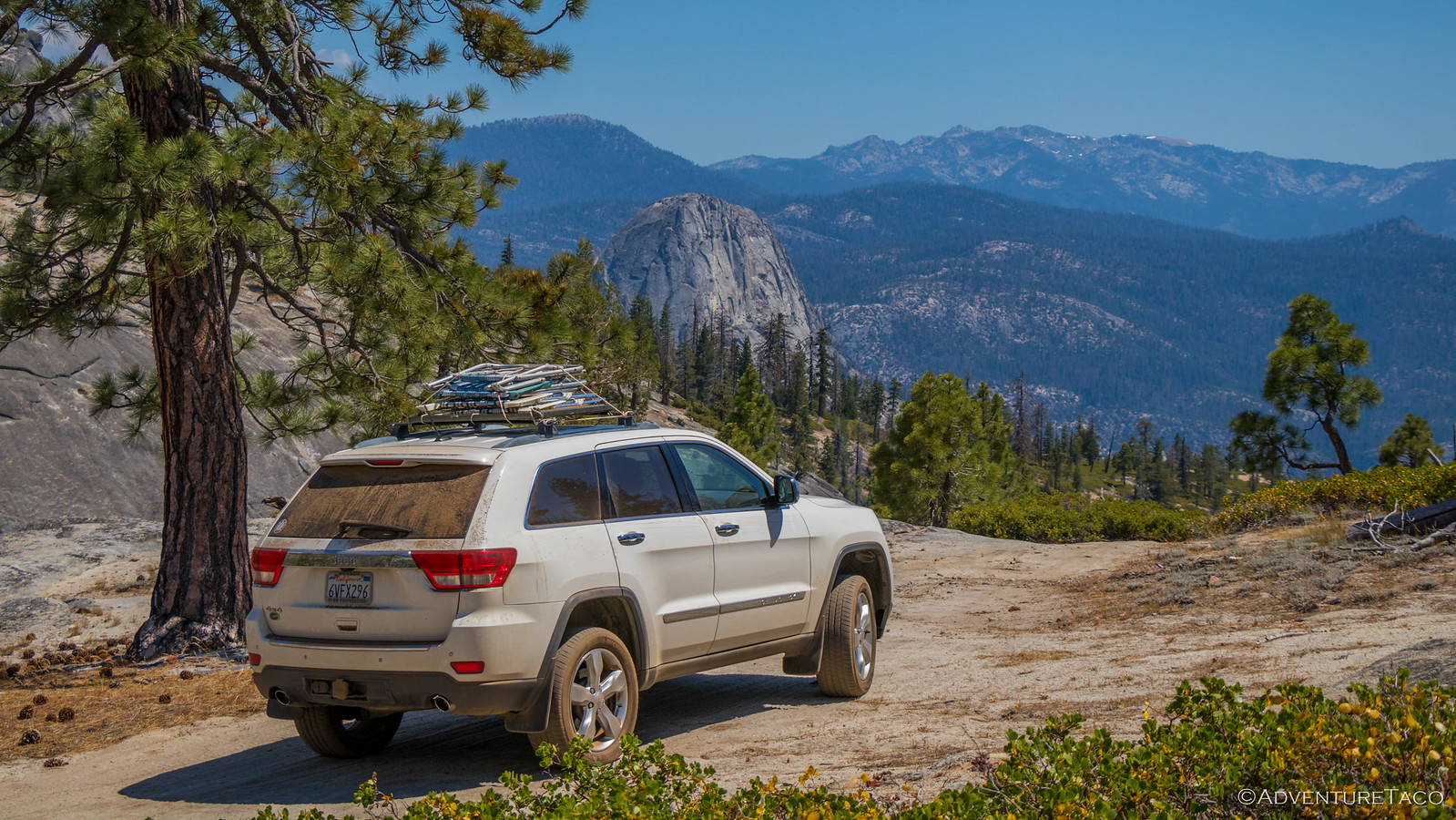 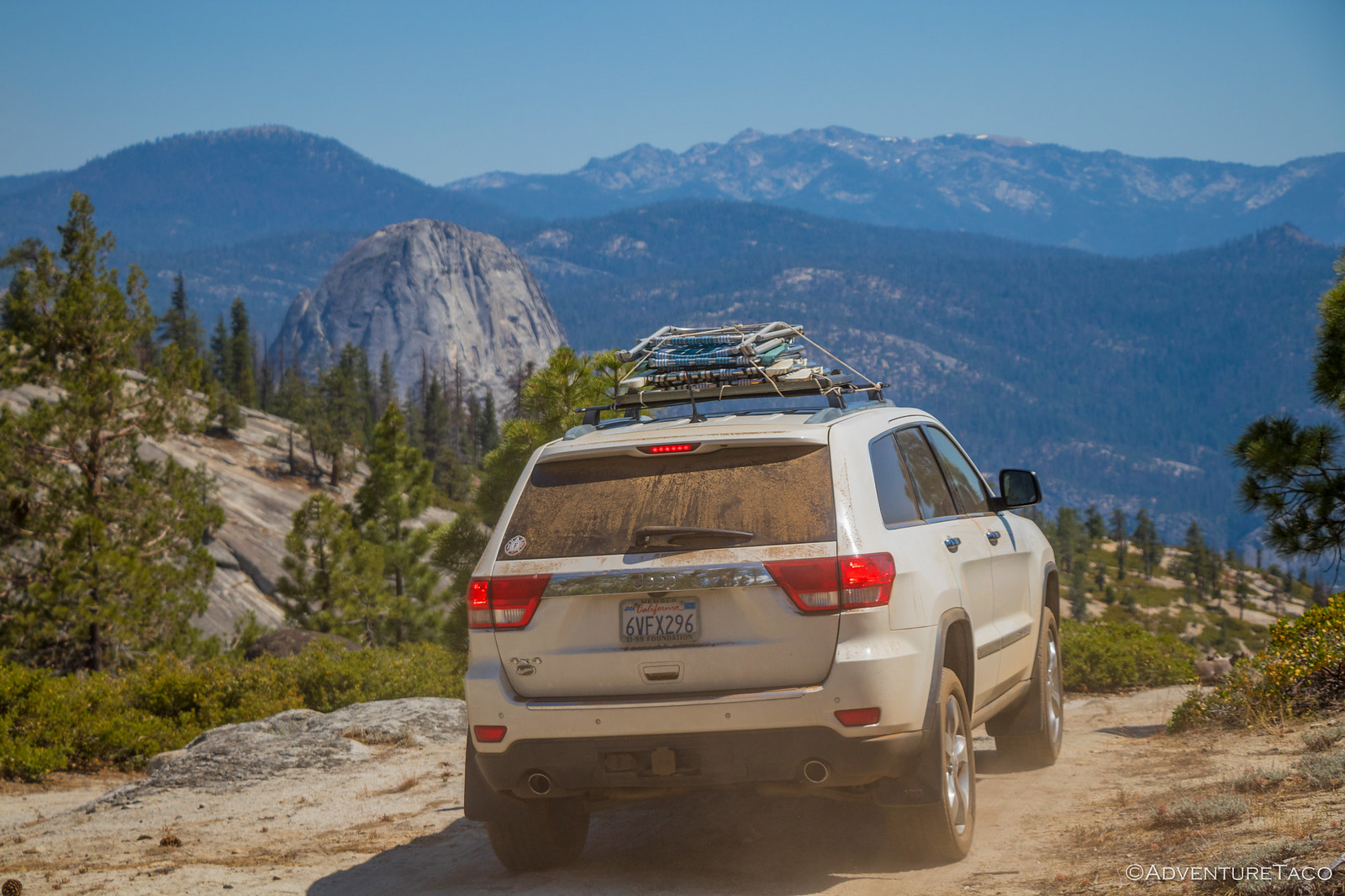 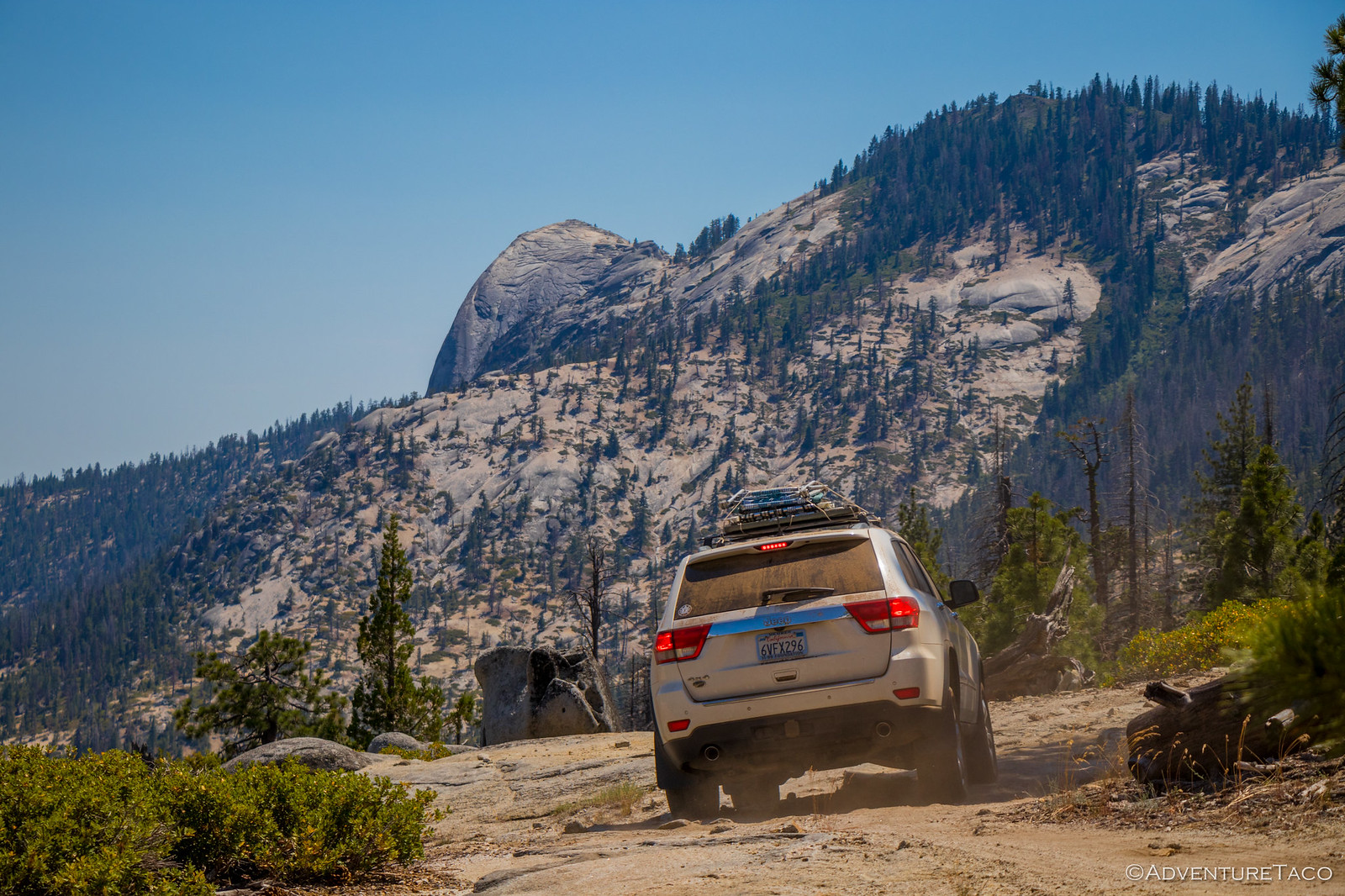 In camp, everything has a place, and every place is based on tradition. This would be demonstrated on a regular basis - sometimes even hourly - over the course of the week. Lunch was at noon. Swimming in the creek, 5:00pm sharp!

And it started with camp setup, which was really more like a series of well-groomed rooms in the forest. "Tools and water over here. Kitchen stuff on the tables here. Rocks around the camp fire arranged 'just so.'" It was great. 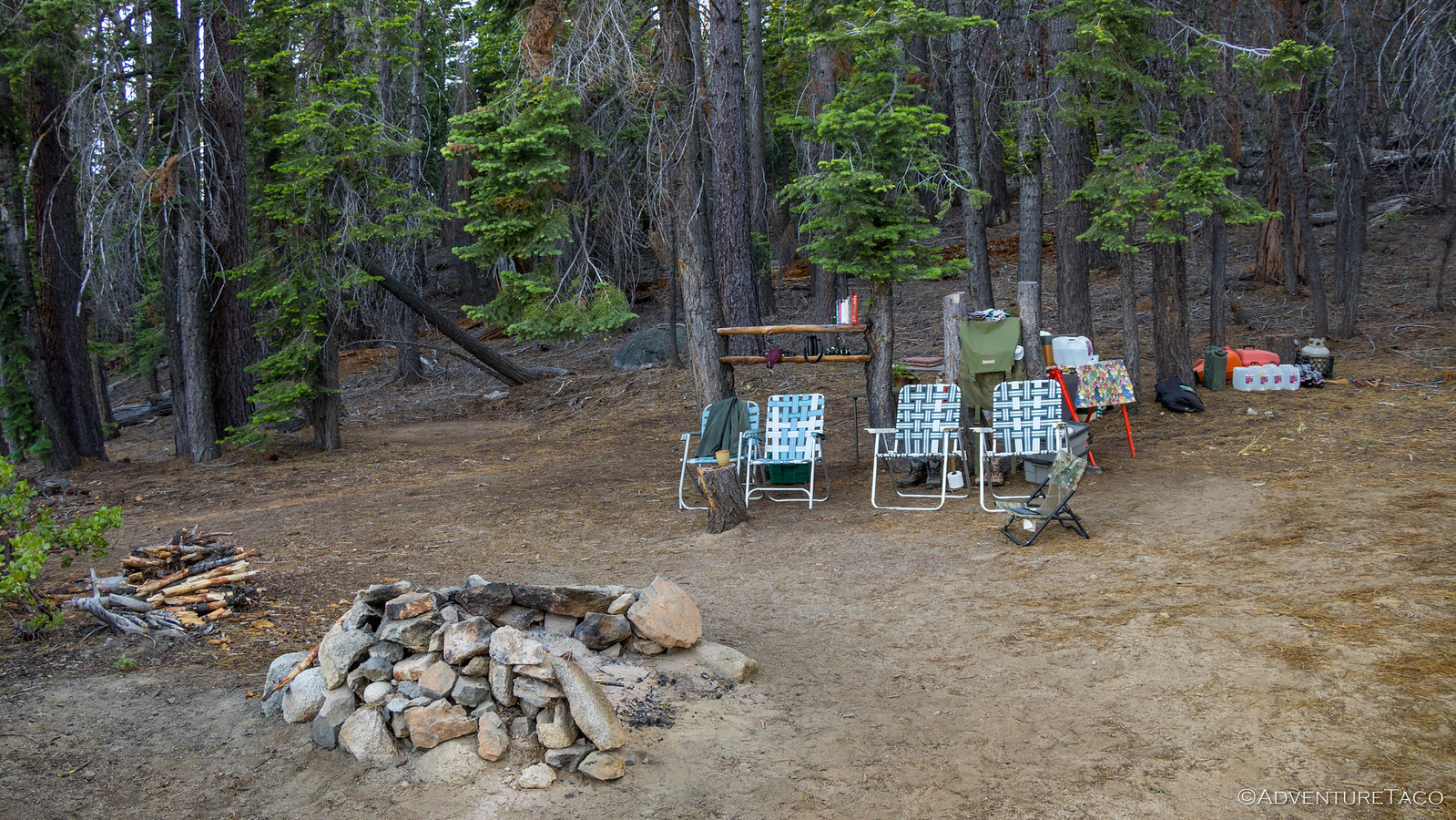 Everything unloaded, my "young" muscles were of less use to the fogies and they shooed me off to find a place to setup the truck and my CVT palace. I knew just where I was headed - the edge of the ridge, above the creek, with a view into the valley.

And - even sweeter - getting level meant a bit of flexy-flexy. Eat your heart out Ben @m3bassman. 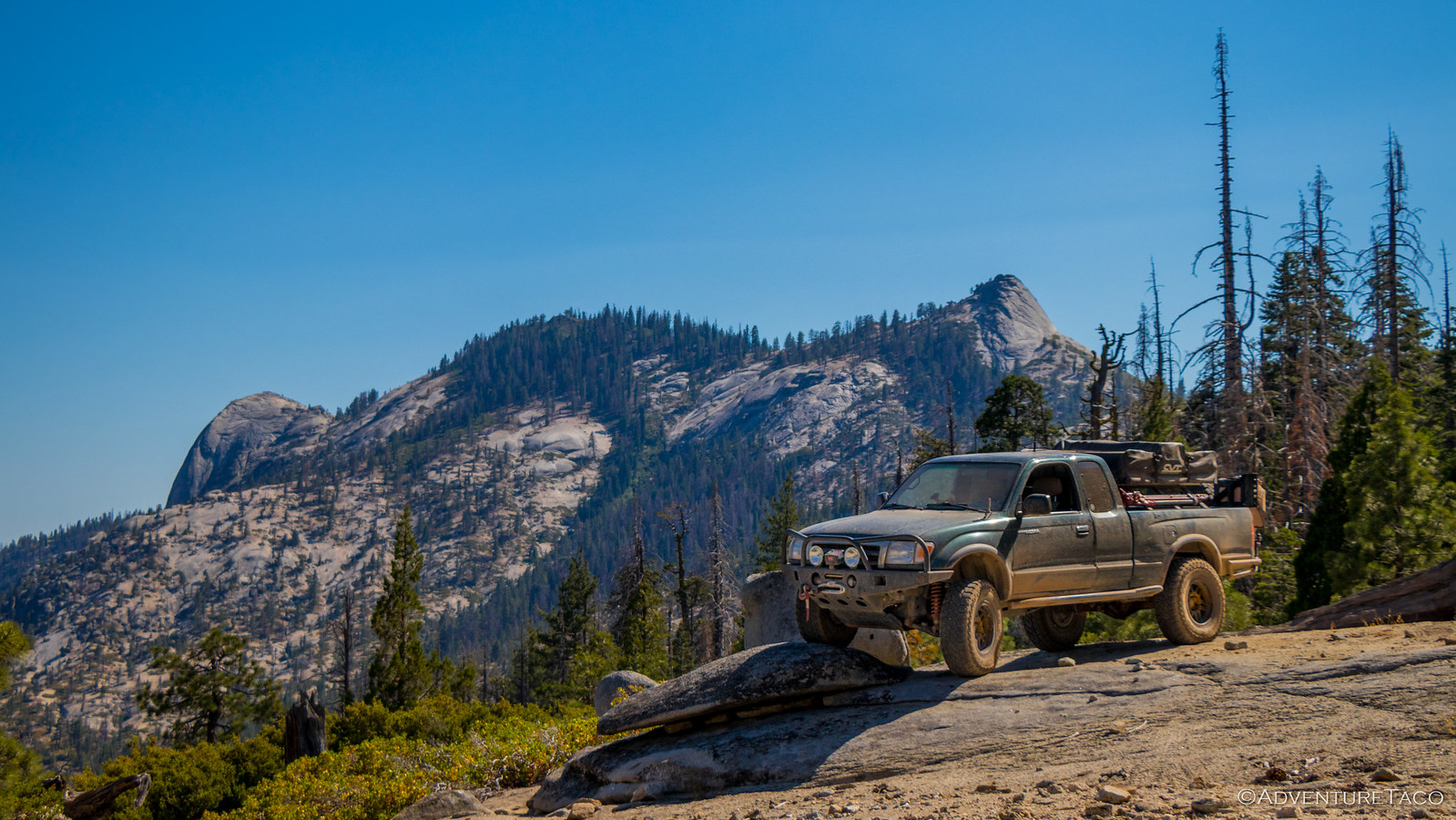 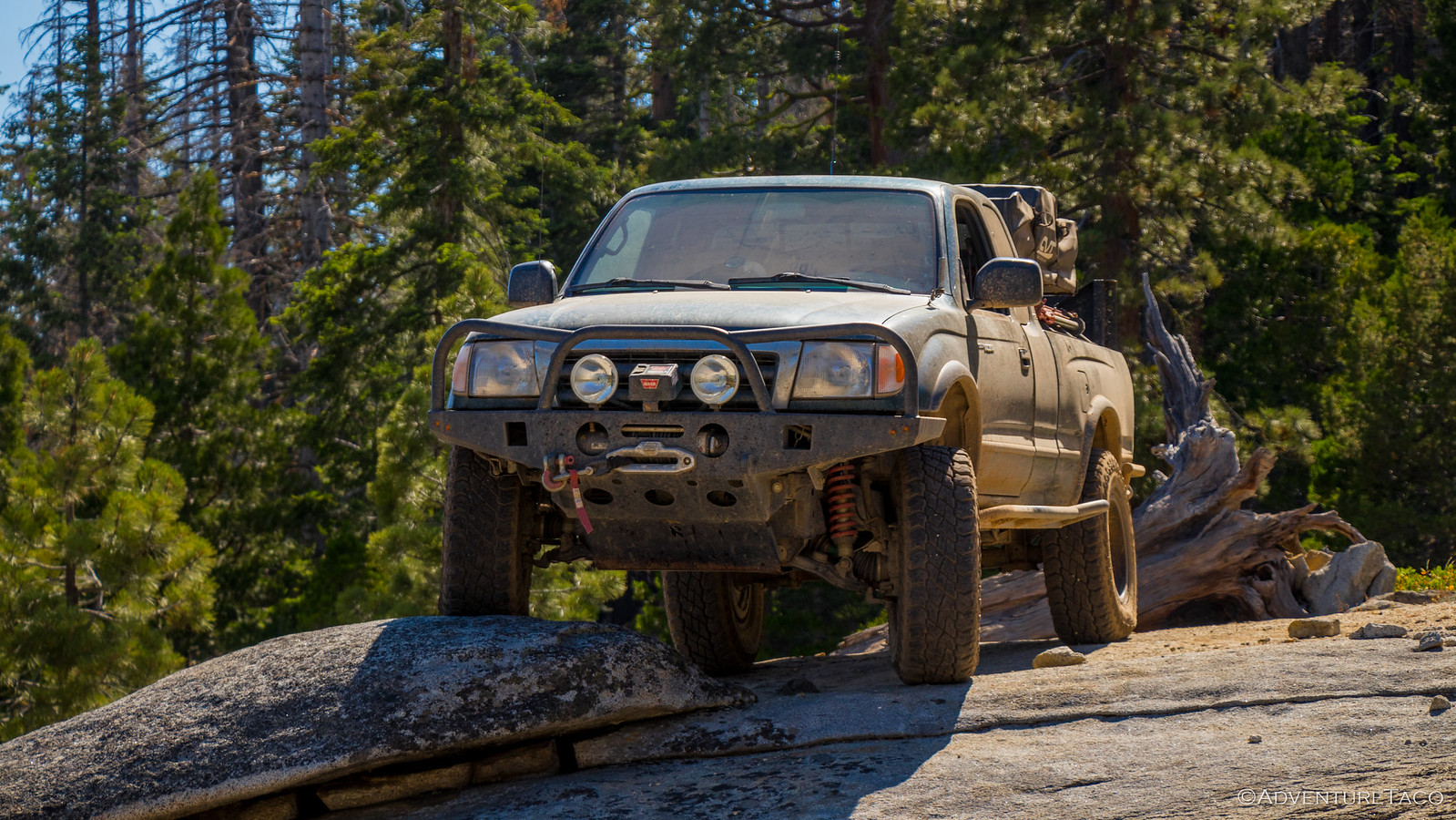 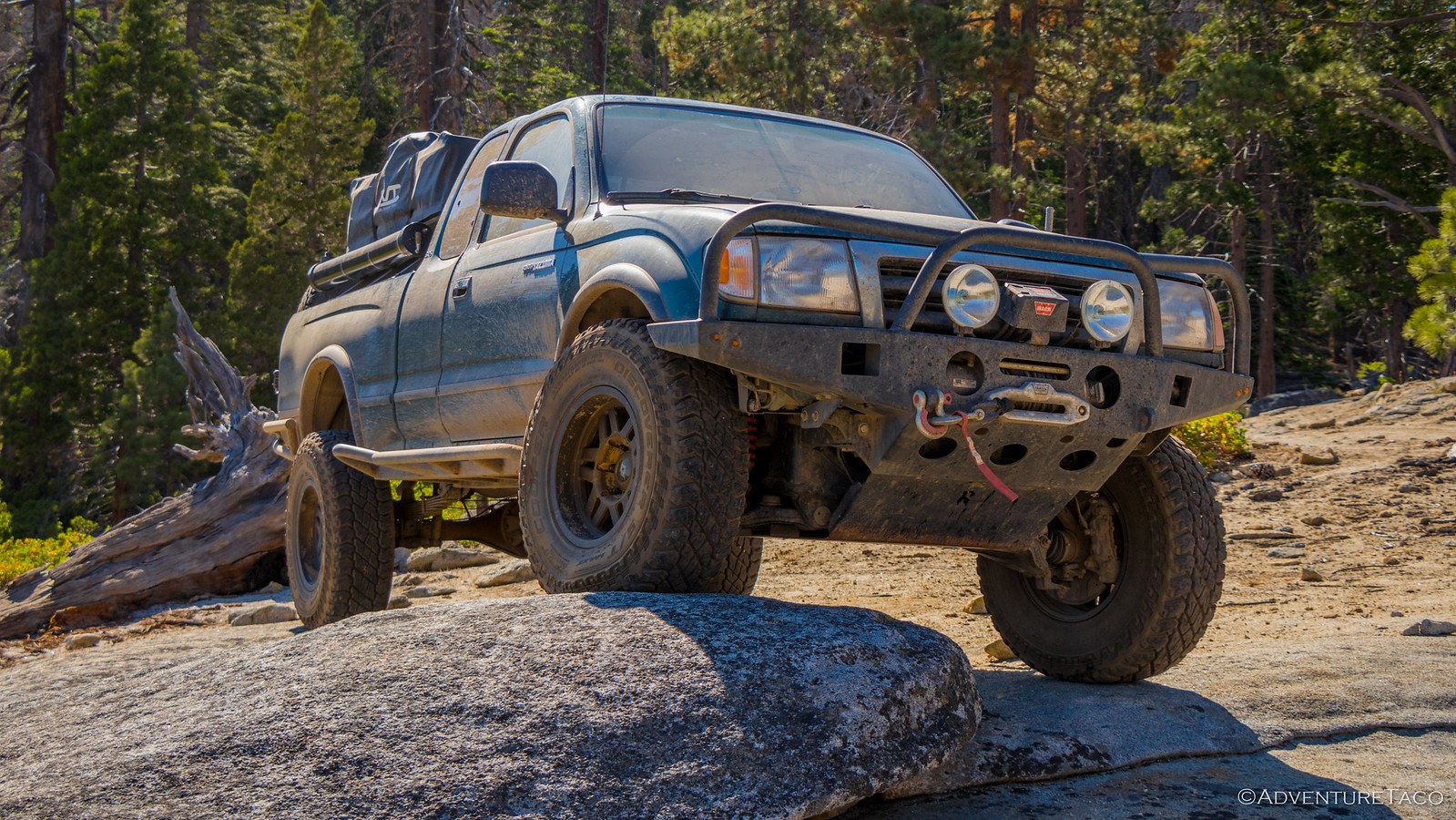 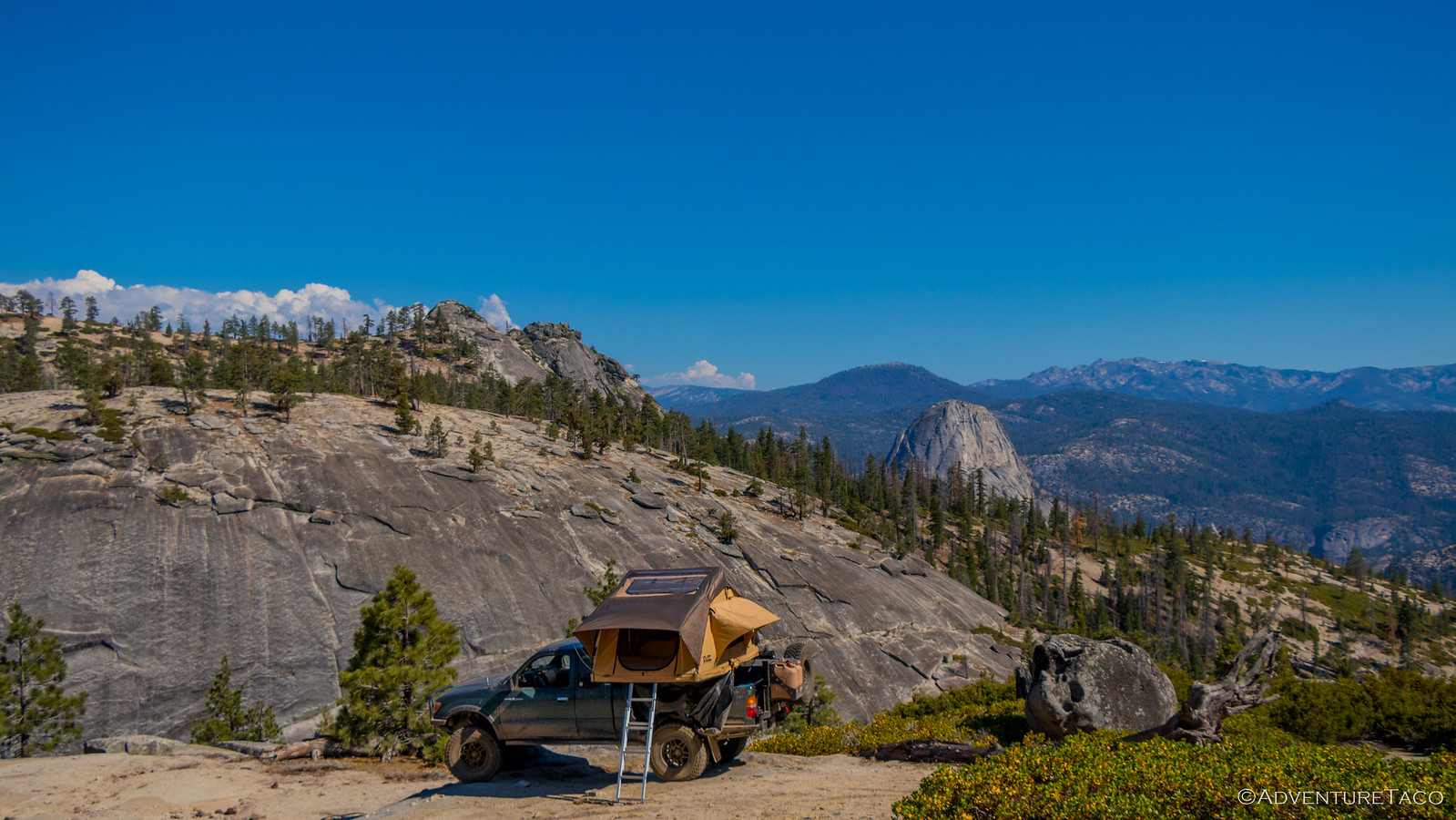 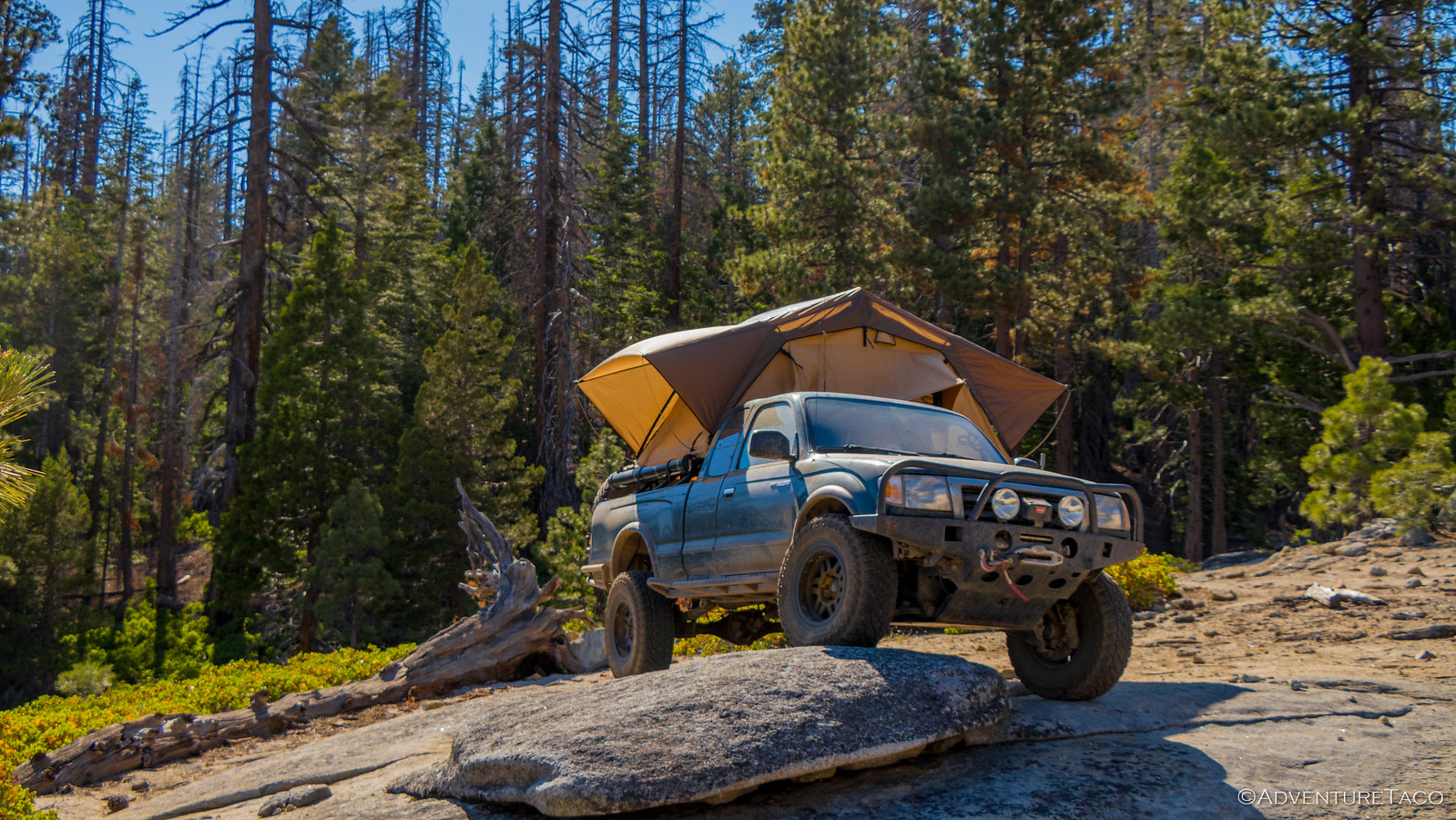 And then we relaxed. Books came out, as did crossword puzzles. A cursory tour of the area, and of course dinner was delicious and on-time. Eventually, our first sunset and campfire, enjoyed without the camera - there'd be plenty of time for that in the coming week.

There's More to Somewhere in the Sierras 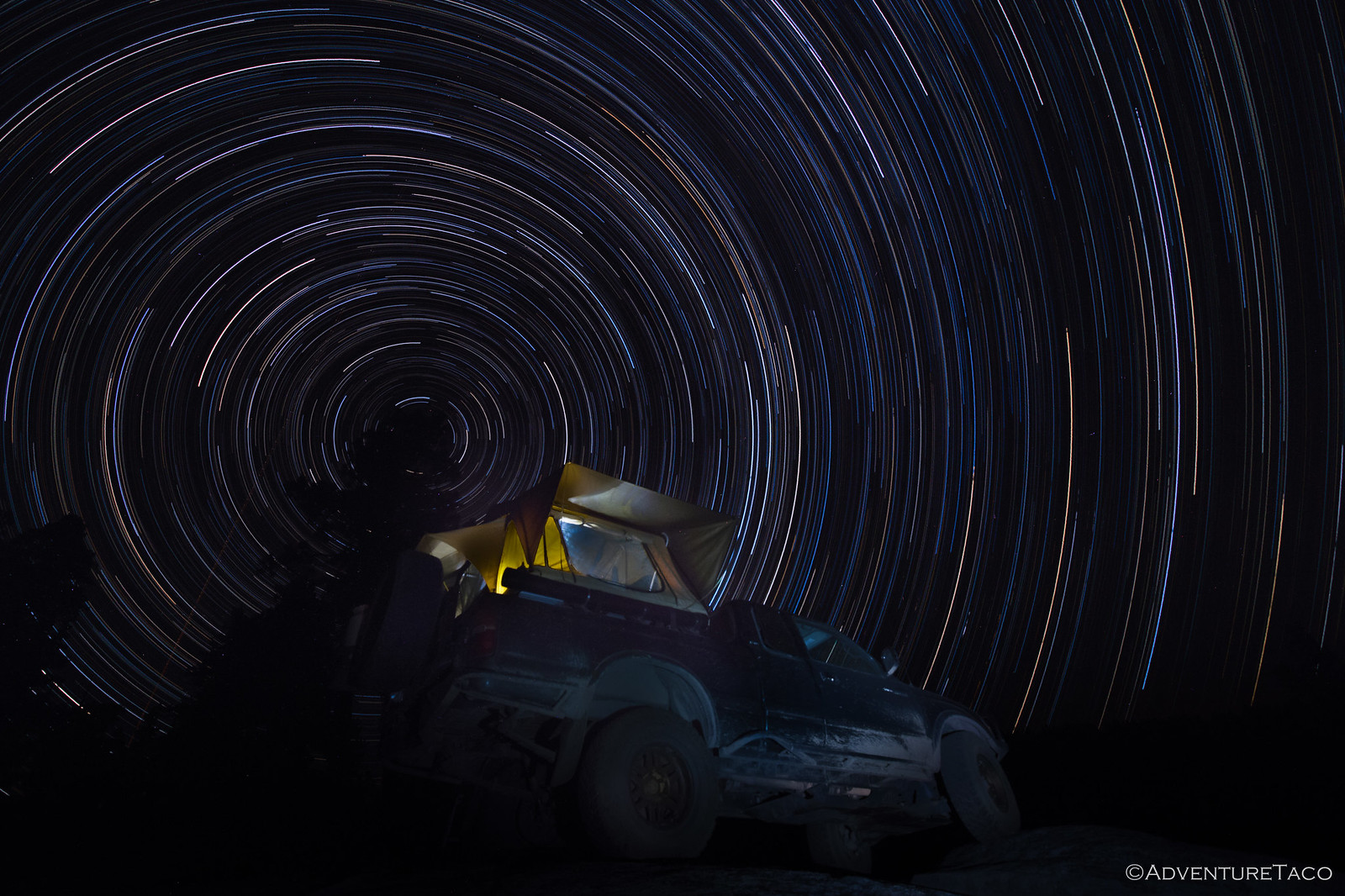 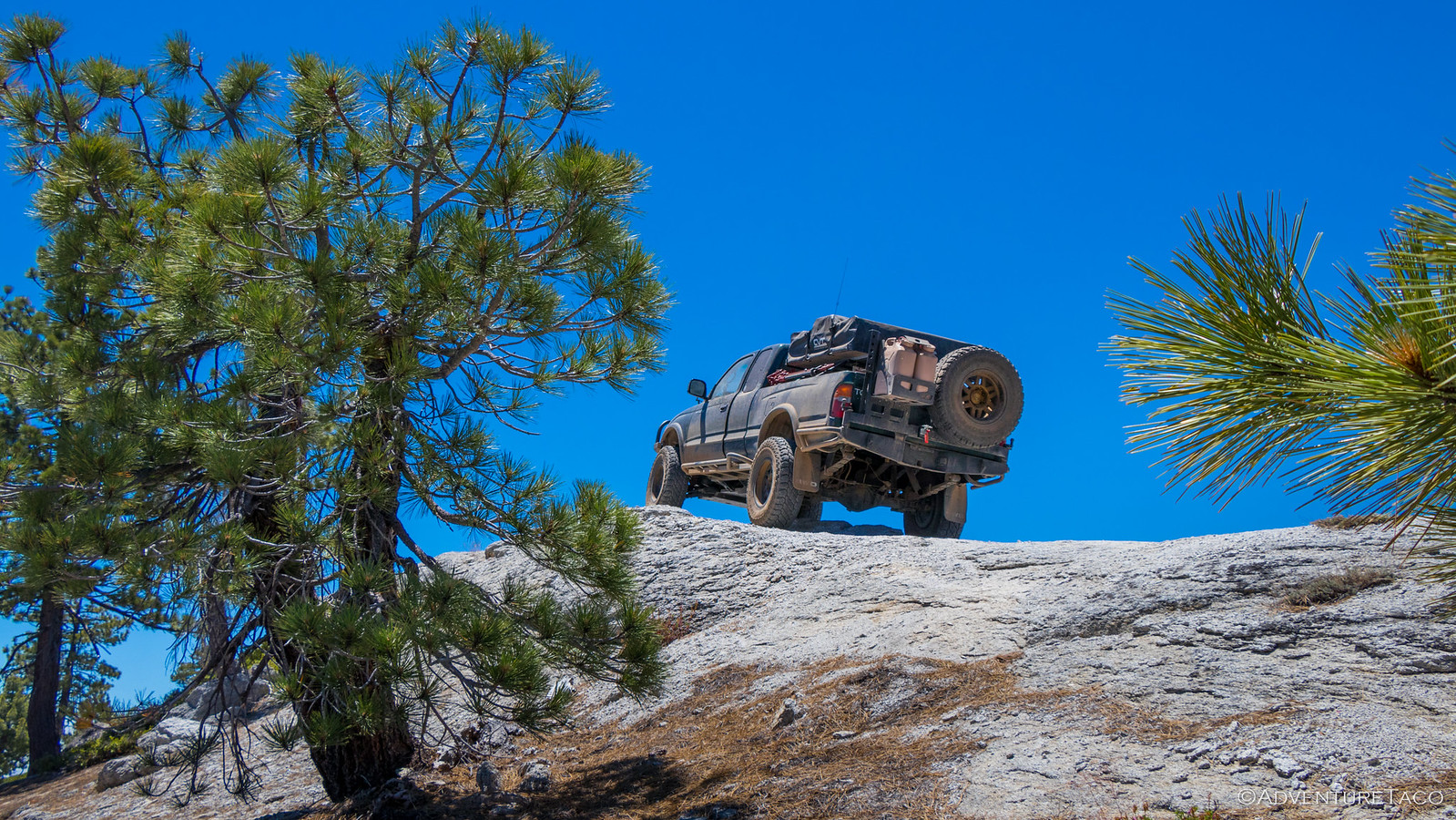 Sierras Part 3: We Adventure Out!