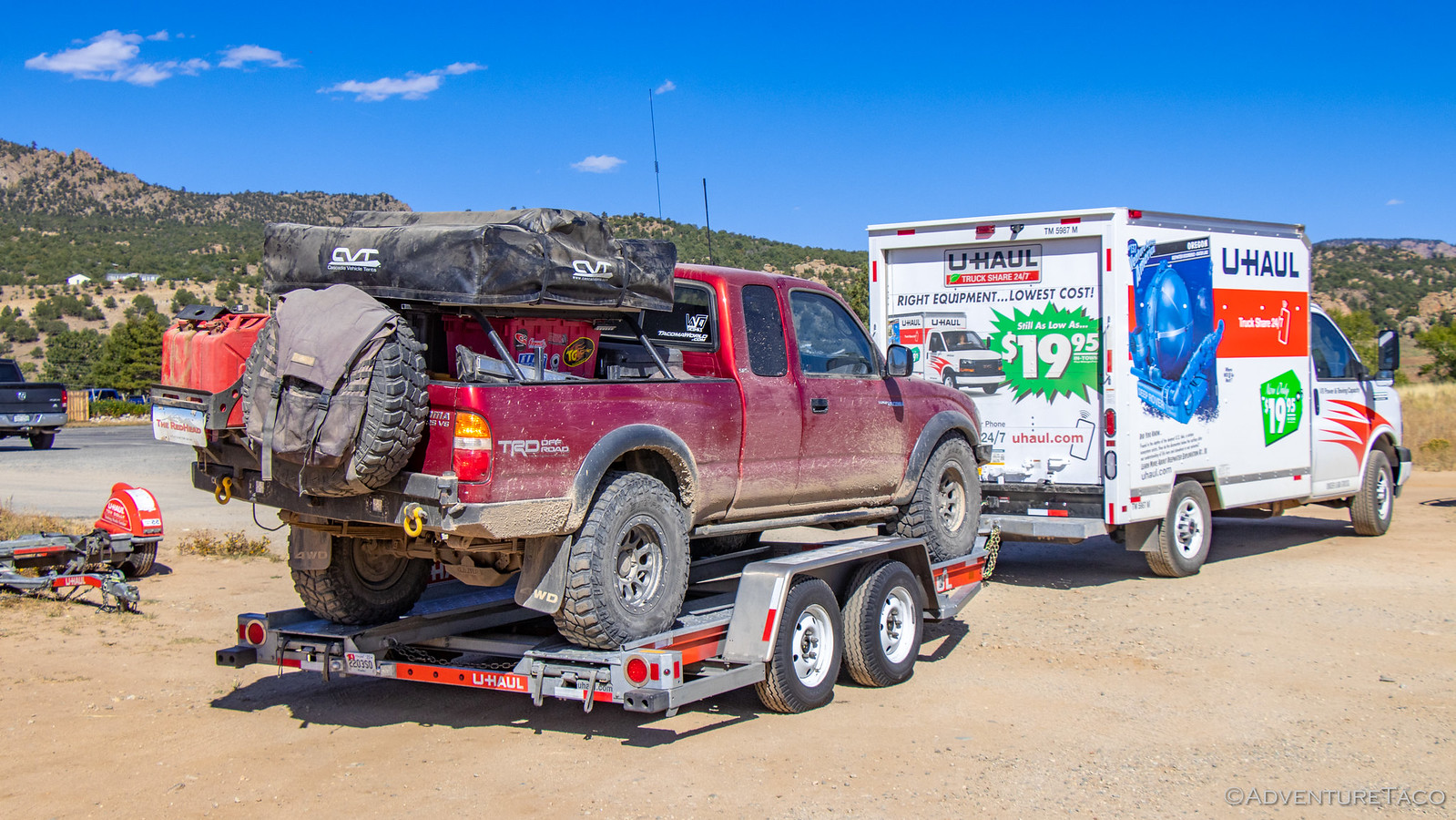 Still unsure exactly what the day would hold, we were up before 9:00am to get an early start on figuring out how to get the Redhead home. As we broke down camp, I happened to notice that if I stood in just the right place, I got a single bar of Internet on my phone, and soon enough we'd done a bunch of research that made us all feel quite a bit better. 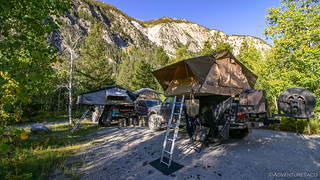 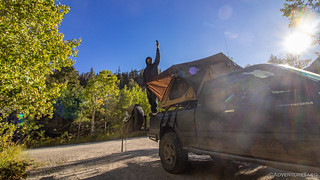 The Internet is better up here.

I was able to download my 1st gen Tacoma parts list and to our surprise, shock towers were a separately orderable part - great news since we were worried that they might only be acquirable as part of a full frame! At the same time, we were able to research the feasibility of a U-Haul rental for the Redhead, and it looked like that might be doable in Buena Vista - the nearest town - rather than requiring a drive several hours to Denver.

And the Redhead - looking as sad as we've seen her - wasn't going to make it to Denver. 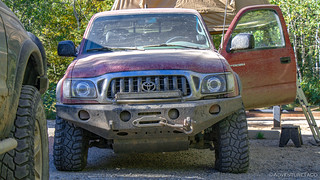 With the good news, we got done packing up and Mike @Digiratus led the way towards town, with Monte @Blackdawg in the middle and me following at a distance with my hazards flashing. 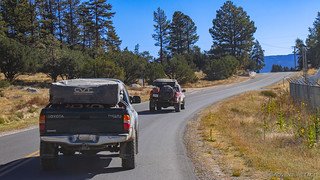 We made a beeline to the U-Haul, hoping they'd have both an auto-transport trailer as well as a 10' van to pull it. The van was there, but it turned out the trailer was located half an hour south in the town of Salida, so we locked up the Redhead and hopped in the two green trucks for the journey. 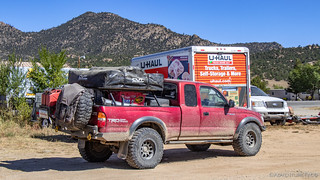 It was on this trip south that two notable events took place. First, the Tacoma hit 130,000 miles. That's still baby steps for a 20 year old Tacoma, but it was just a couple years ago that I hit 60,000 miles, so there've been quite a few adventures in that time! 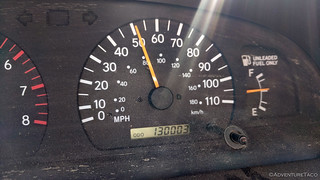 The second event was a bit less momentous, but perhaps more predictable. See, since the evening before - about the same time Mike and I had our troubles - Monte had been feeling that his steering was just a little sloppy. He wasn't sure what the problem was exactly, but the truck would pull right as he braked. As we waited for Mike to get all set with the trailer, he figured he might as well check his lower ball joints (LBJs).

It wasn't a pretty sight. 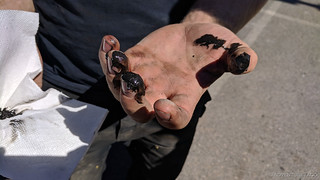 That grease isn't even from the LBJ itself - it's from the lower control arm (LCA) below the joint. And that meant that the joint itself was nearly dry. Had the joints let go on the trail, Monte could have had the most serious breakdown of us all!

At any rate, we hooked the trailer up to my truck and started back to Buena Vista - where we'd eat lunch and then load up the Redhead for the long trip home. 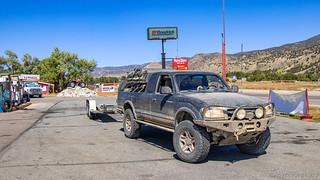 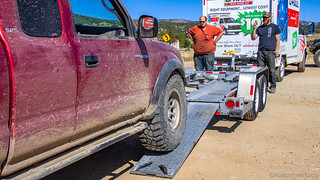 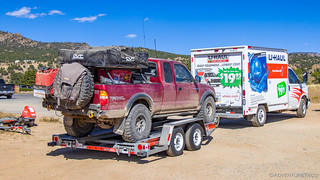 It wasn't a complex affair, but it did take a bit of time to secure everything in a way that we were reasonably happy - the winch pulling the truck forward, heavy duty straps attached in the rear. And with that, Mike pulled out of the U-Haul lot, the Redhead in tow. 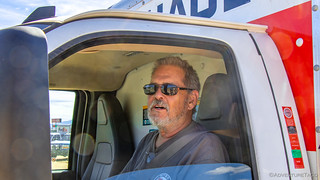 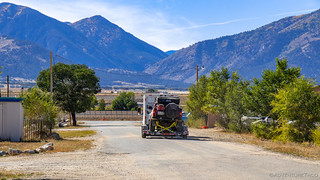 We weren't - however - headed home yet. In fact, Monte and I had planned to let Mike get a head start home while he and I returned to Mt. Antero to bag our 14er, but Monte's LBJ discovery had put a kibosh on that plan. Instead, all three of us high-tailed it over to the local town park where Monte could more closely evaluate his situation, and try to make it work for his journey home.

Except he never got that far. Just a block from the park flashing lights lit up behind him. The local sheriff had seen his IGOR license plate and was wondering what the heck was going on.

As Monte tells the story, his response started something like, "There's a bit of a story there sir, so bear with me..." and he then recounted how the plates save us a bunch of time when editing photos on these amazing journeys. The sheriff was quite appreciative of the situation, and after checking to make sure Monte's registration was in order, complemented all of us on our trucks and wished us a safe journey.

And then Monte dug into the ball joints. 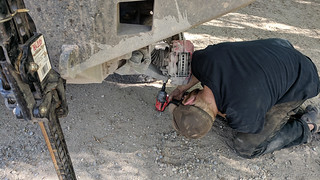 In the end, the problem was obvious. The new Solo LCAs he'd purchased - the beefy ones that were going to make his alignments easy and that he never failed to remind us were so much better than OEM - were simply too thin where the stud of the balljoint passed through them. That meant that the lower castle nut could never fully tighten - something he'd missed during install. Both of them had nearly worked their way off when he finally discovered them, disaster likely only a tank or two of gas away!

Luckily, the solution was nearly as obvious as the problem. Or at least, the immediate solution was. We headed over to the local Tractor Supply and purchased several thick, grade 8, lock washers. With these slipped over the studs, we could effectively increase the thickness of the LCA, allowing him to snug up the castle nuts and correctly install the cotter pins.

It was a hack - and not the level of quality he'd expected from Solo - but it worked in a pinch, and within a couple hours, everything was buttoned back up and the truck was once again roadworthy - at least for a short time. 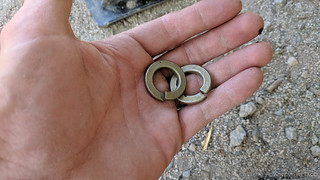 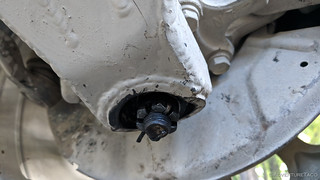 By now it was 5:30pm - as often seems to be the case, trail fixes taking much of whatever day they are started on - and we knew there was no hope of getting to the summit of Mt. Antero before the sun set. That left only one thing for us to do - continue as battered band of Tacomas - towards home. 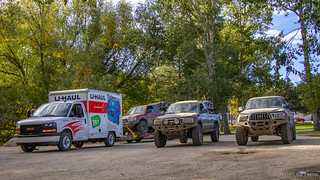 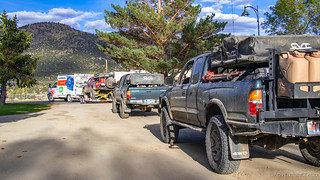 We'd travel together for four hours or so that evening - into the sunset as it were - Mike and the Redhead leading the way. Monte and I got the best gas mileage ever - at just over 22mpg - our route losing 7,000 ft of elevation and kept to 55mph. 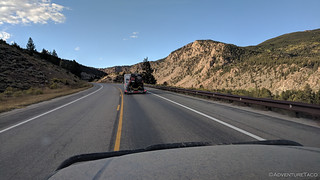 We'd come to Colorado for an unforgettable adventure - and that's just what we'd had. And as always seems to be the case, we left plenty to explore on a return trip! 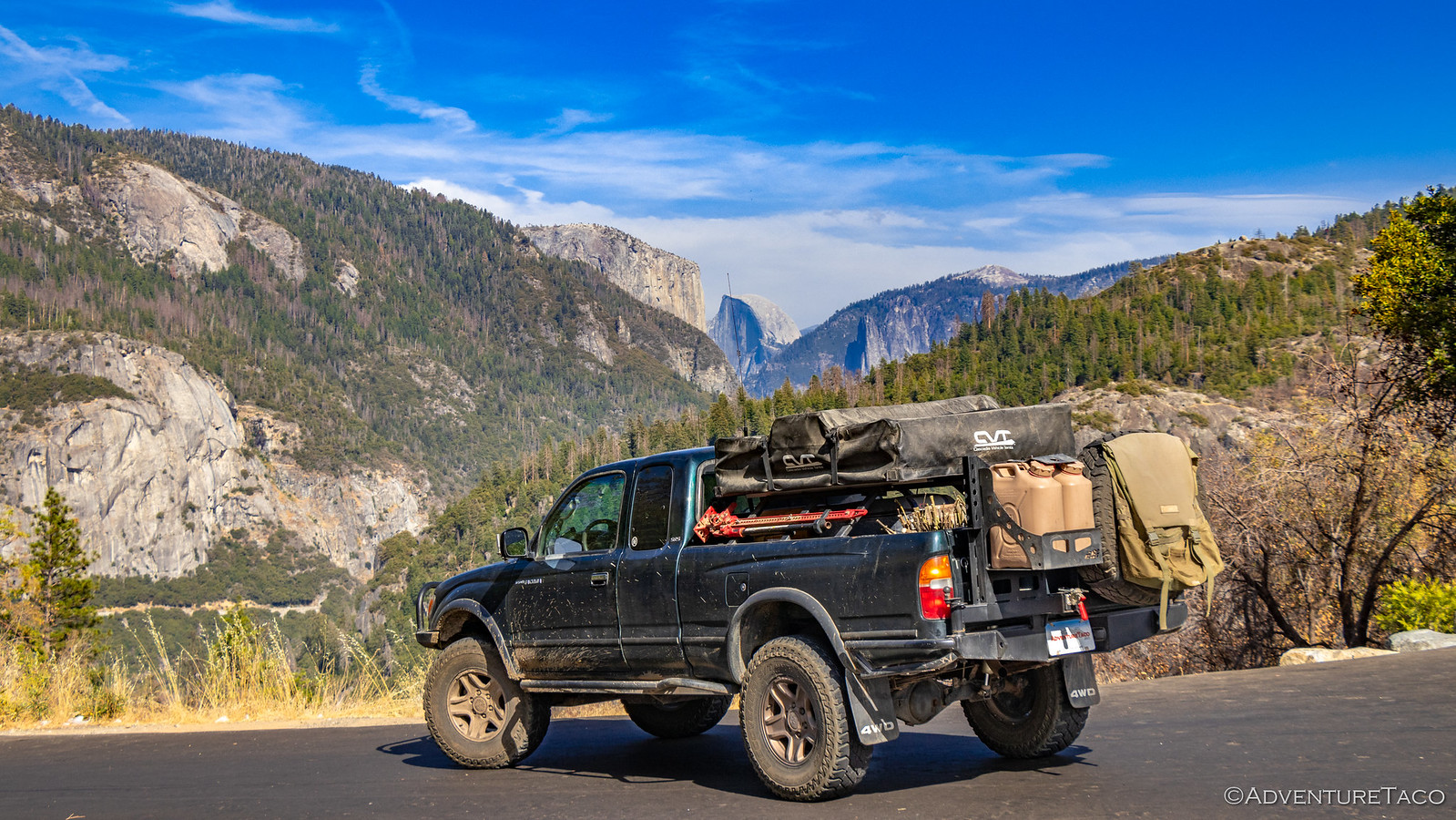 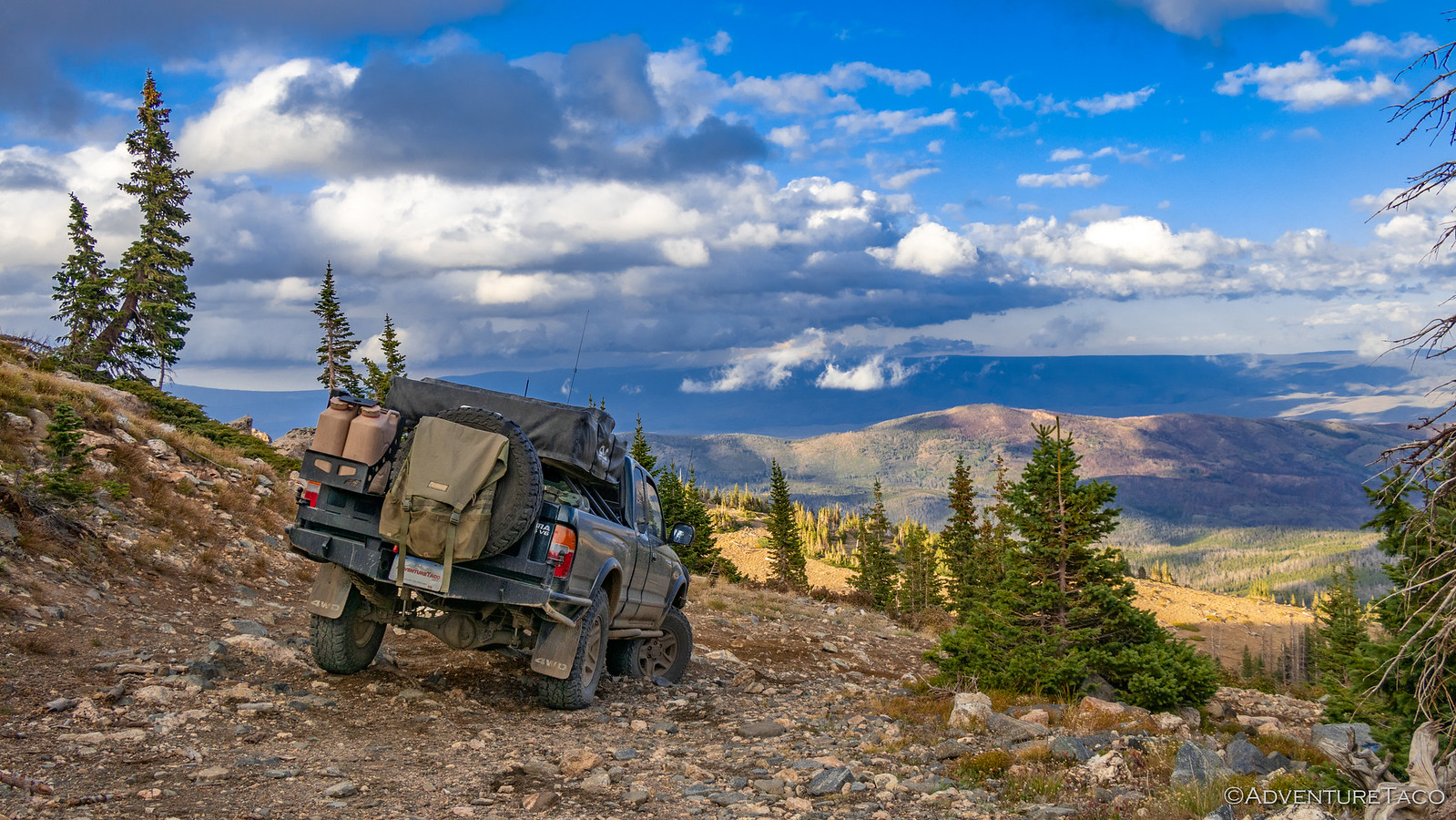 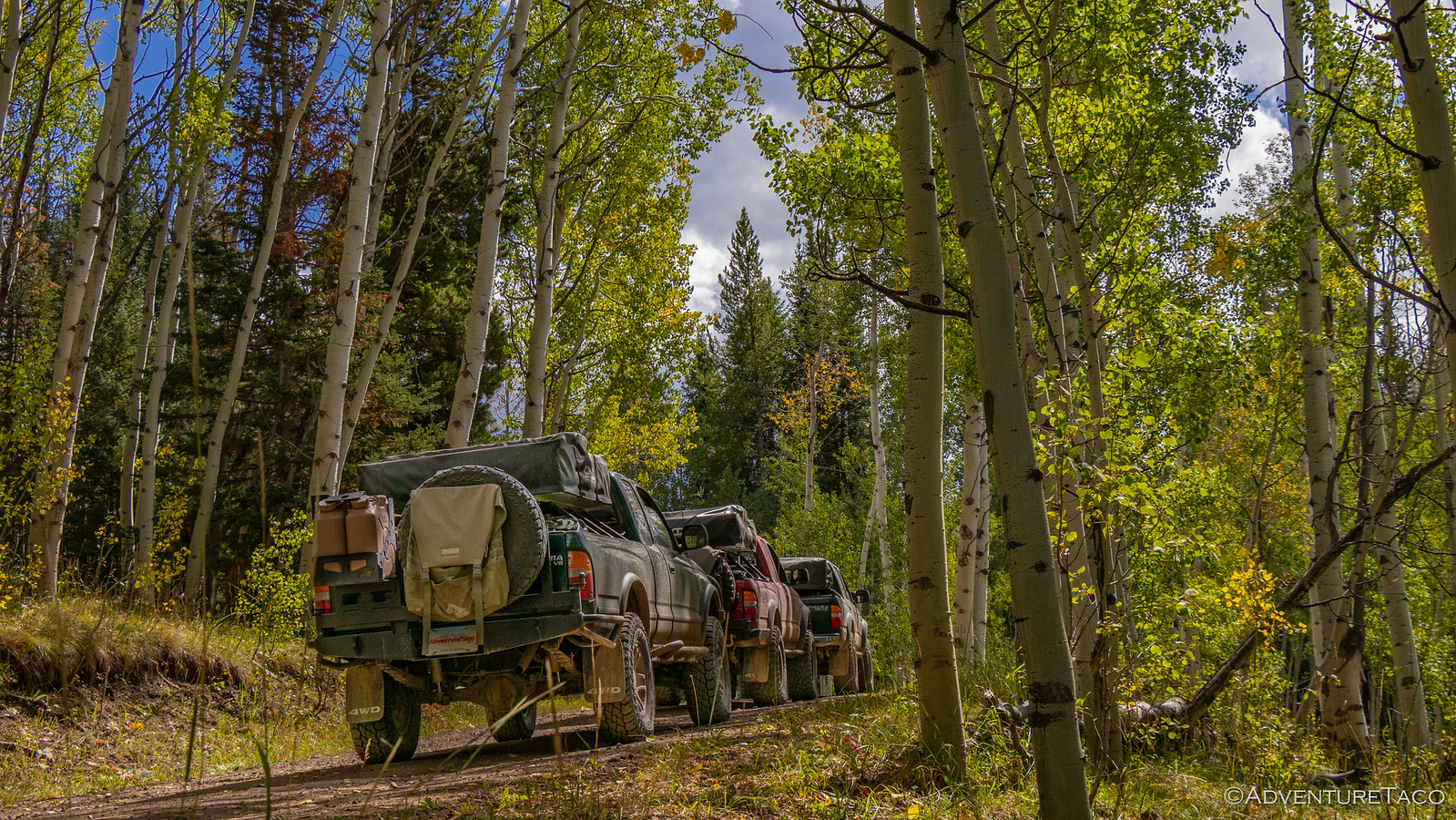 Redhead Down #3: We Cross into Colorado 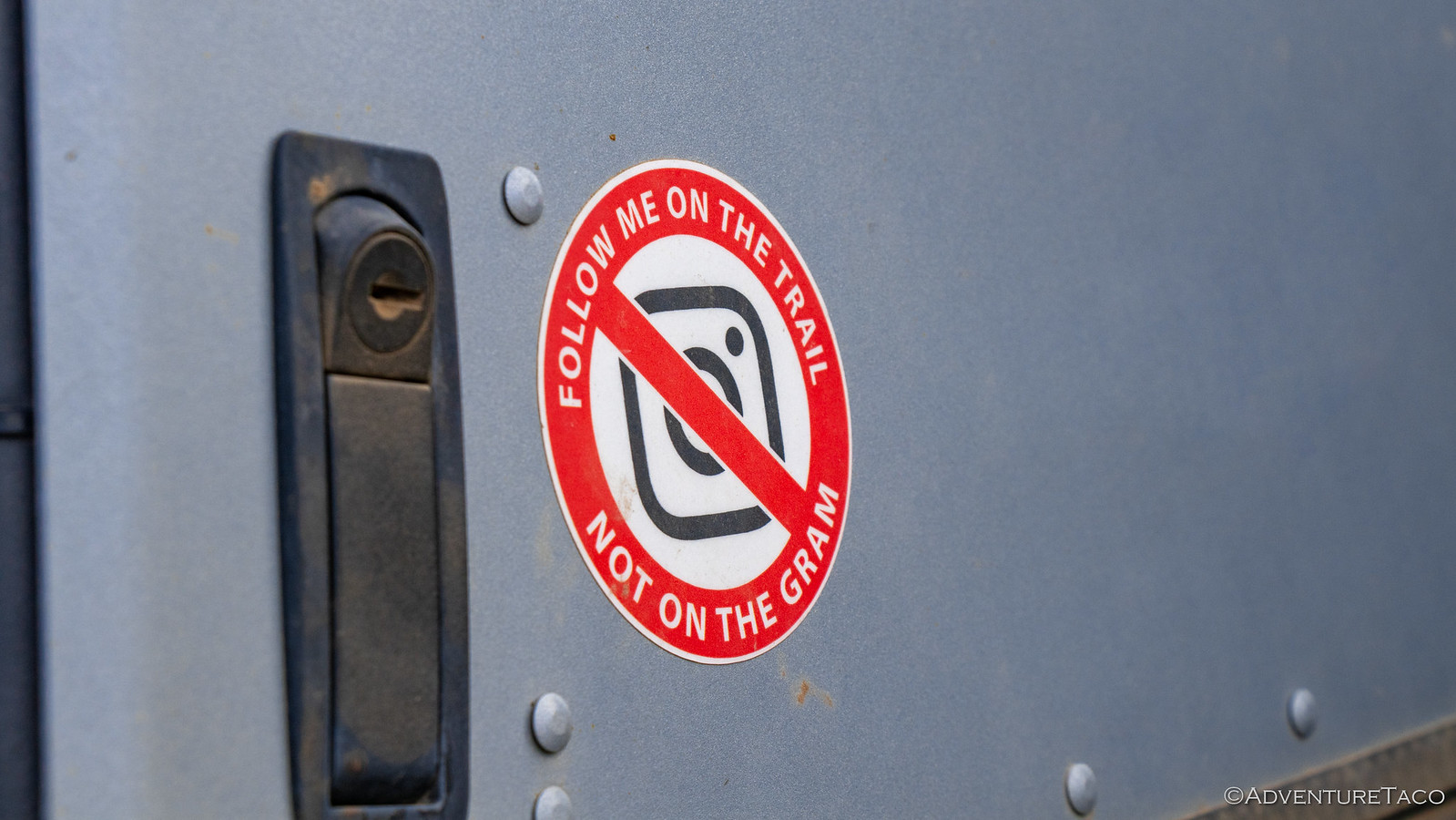 Redhead Down #4: Follow Me on the Trail, Not on the 'Gram 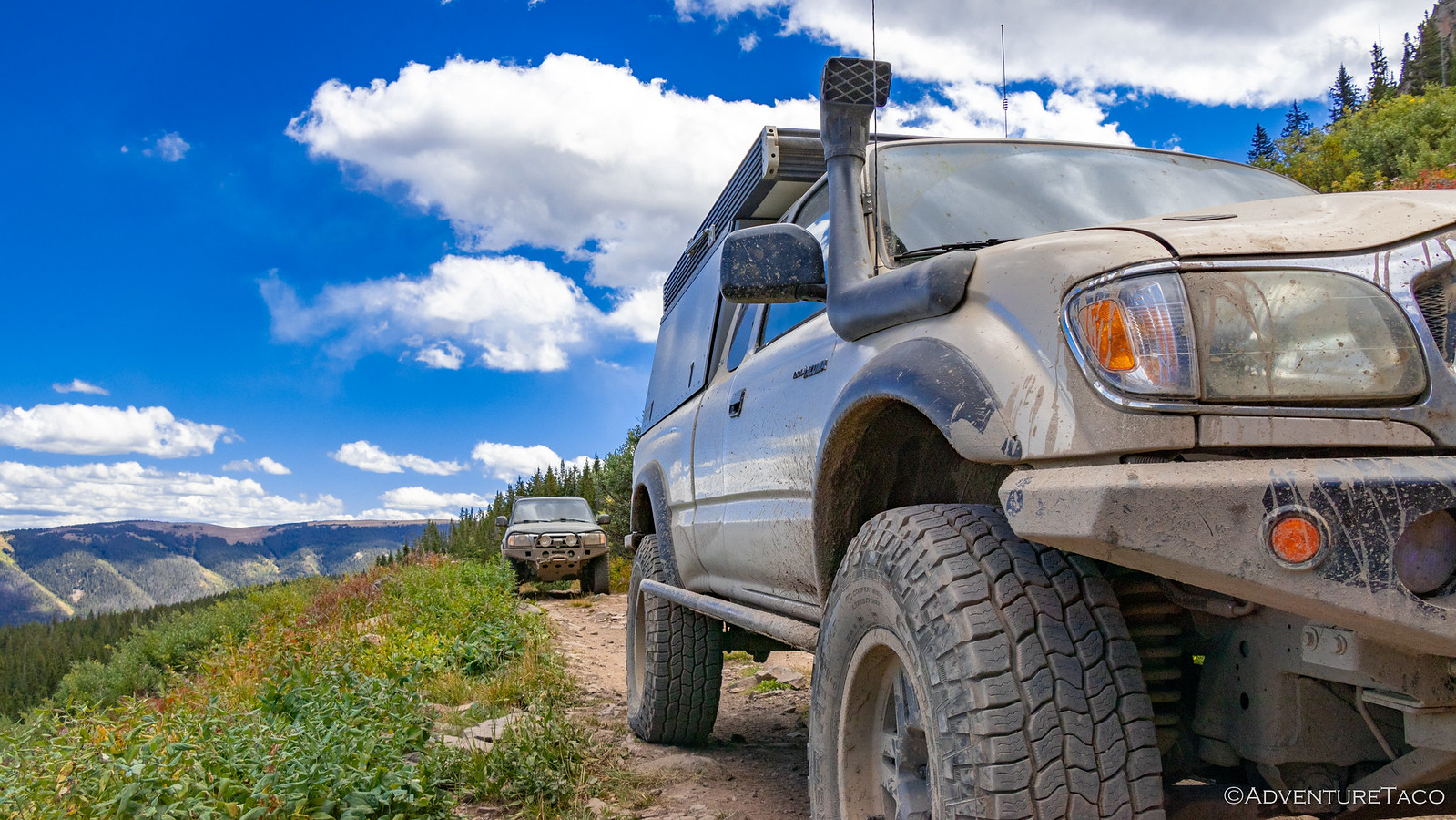 Redhead Down #5: The Race 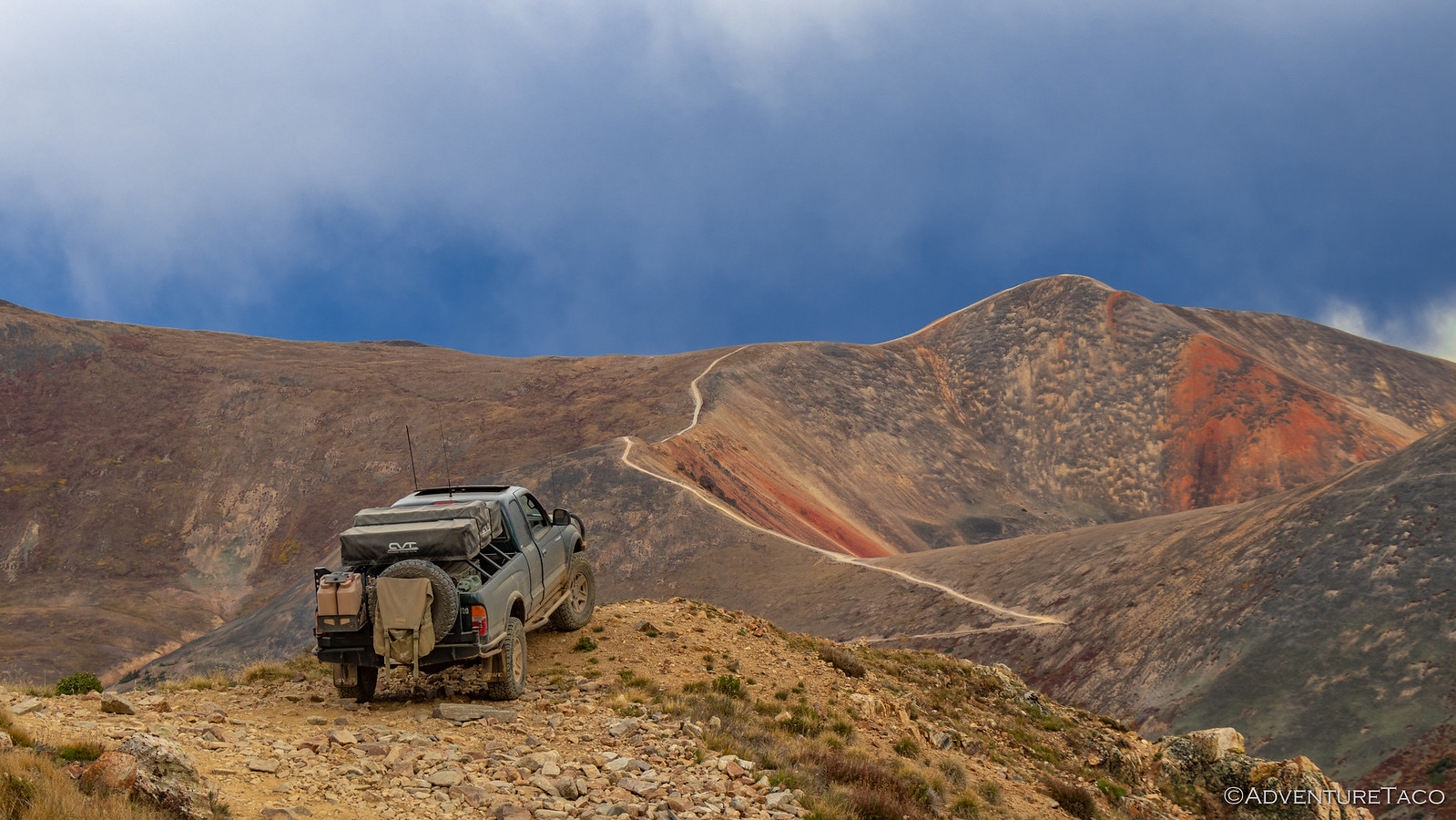 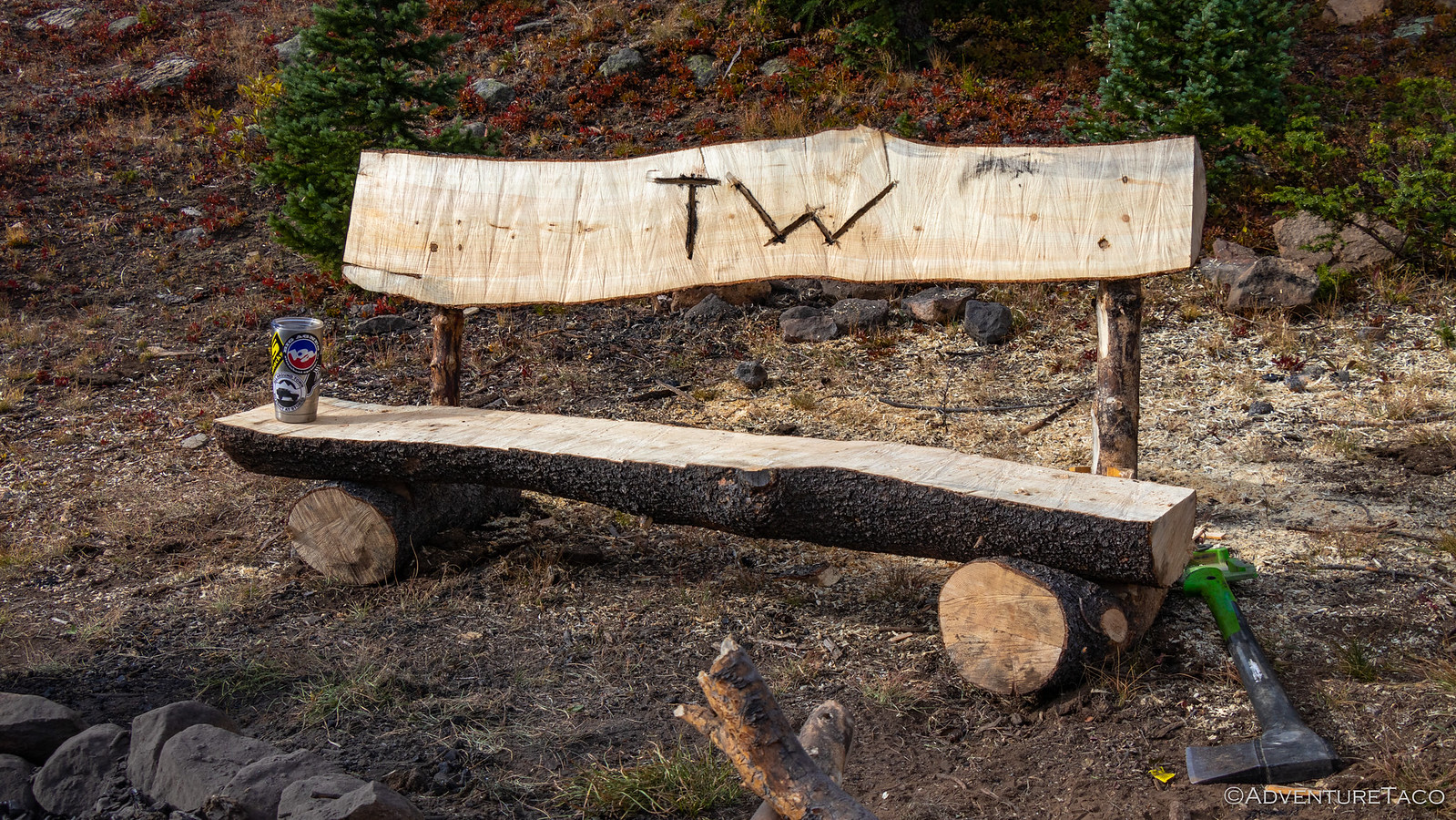 Redhead Down #7: The Day We Made a Bench 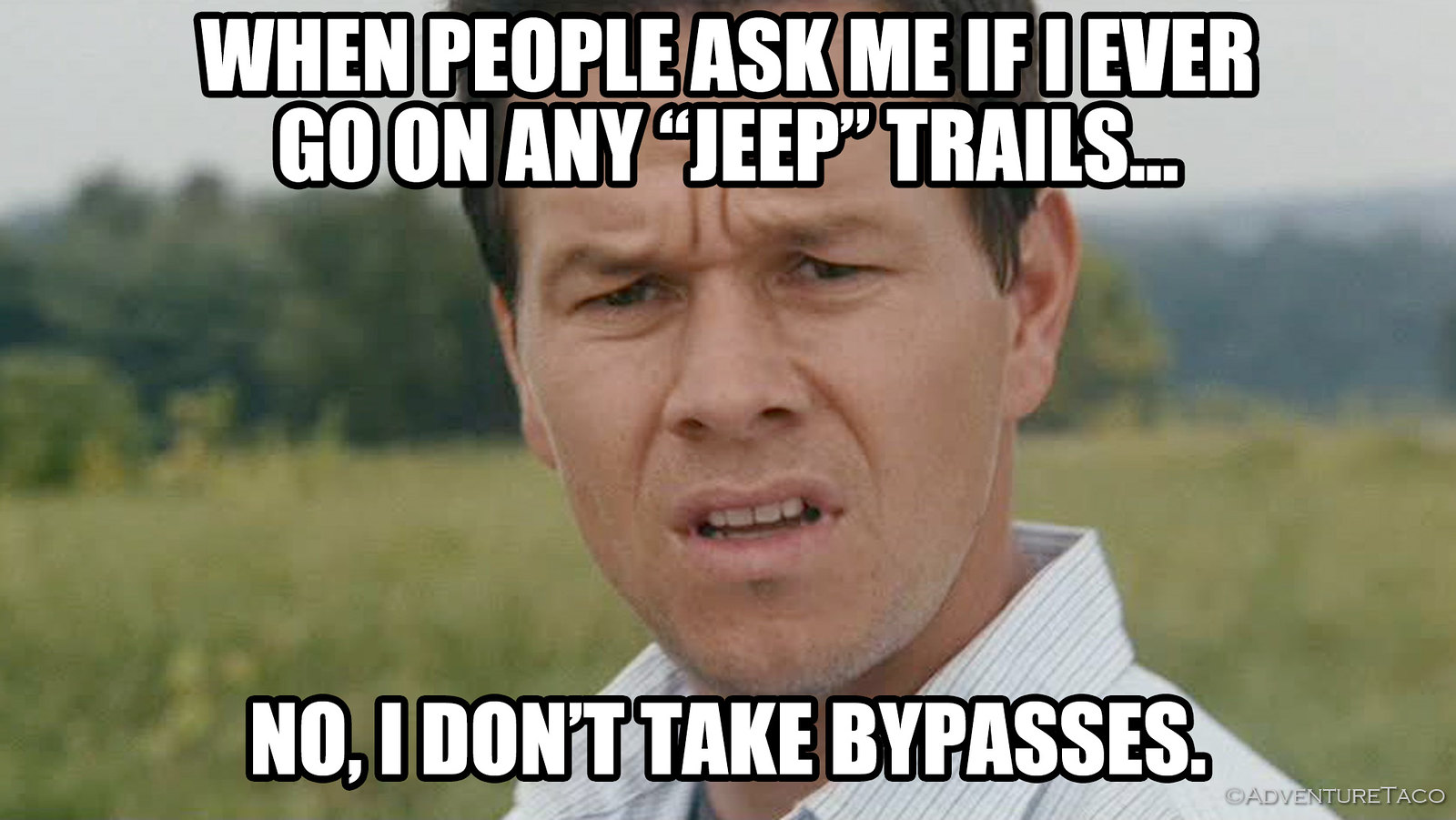 Redhead Down #8: Exploring the Champion Mill 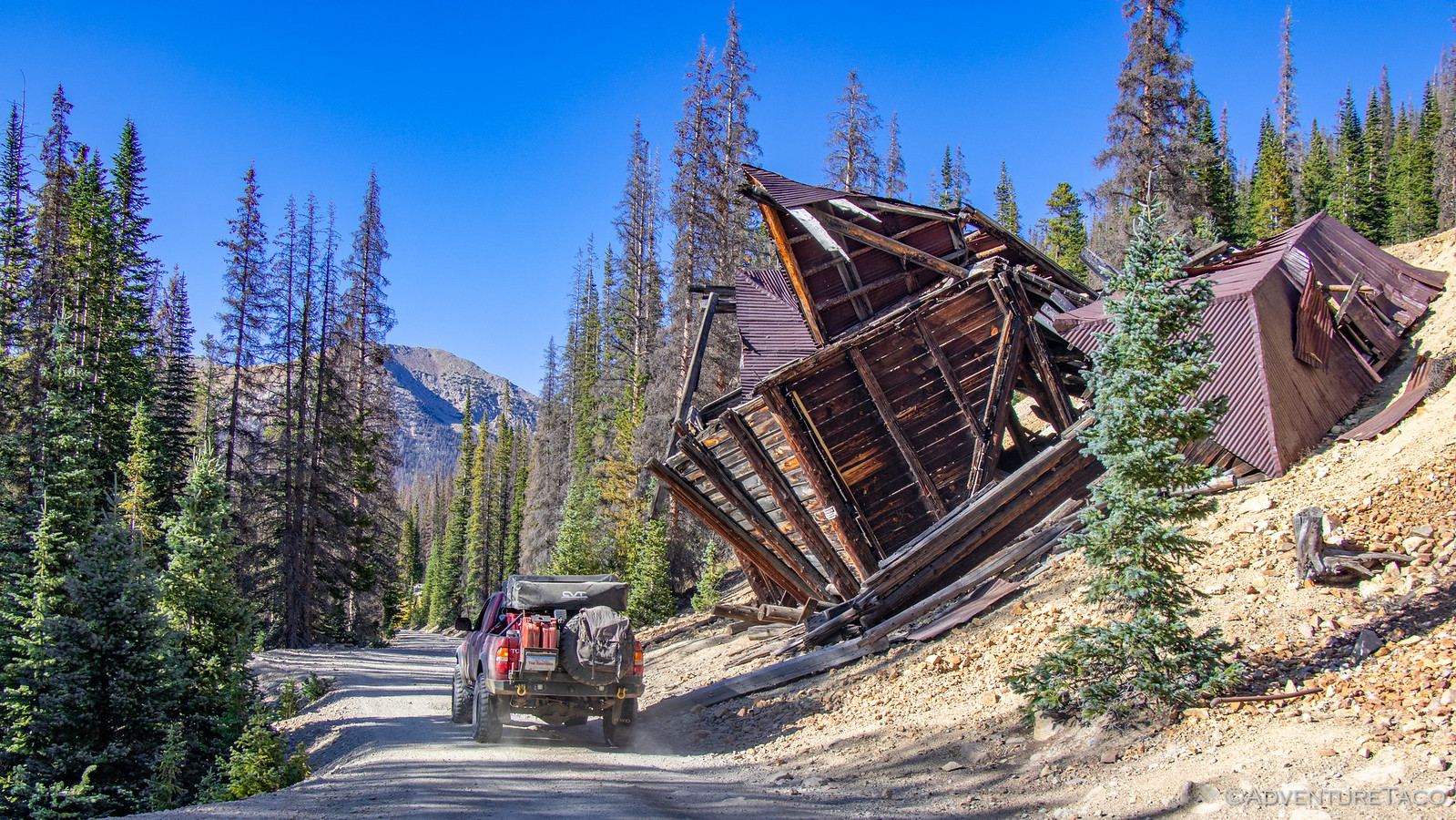 Redhead Down #9: The Last Hour