The trip to the Alvord Desert and Hart Mountain Antelope National Wildlife Refuge was one that we threw together relatively quickly and without much work on the truck after the previous trip. The only work really was maintenance - an oil change, tire rotation, and re-booting the passenger CV axle. That said, as the trip progressed, there were still several items worth noting.

TL;DR - I recommend running front suspension with as little pre-load as possible. Having removed about a third of the pre-load from my ADS setup for this trip, the ride was much better and the suspension felt like it was able to work in situations where it was previously hitting full-droop.

On the Utah trip (as well as Anza-Borrego), I'd noticed that my new front suspension from ADS didn't seem quite right. When I'd go over the back side of a bump and the wheel had to travel down to meet the lower ground, I was frequently getting a "clunk" sound that I'd previously not heard (with the Toytec BOSS setup). On talking to Monte (who got the same setup a few months after I did), he mentioned that he too heard the clunk now sometimes - but not nearly as much as I was hearing it.

The only difference as far as I could tell was that he'd removed some pre-load from his springs.

Keen to stop the bump and get a bit smoother ride, I took the opportunity to use the Branick spring compressor to remove approximately one-third of the pre-load from my coilovers (about ¾" of front lift). Needless to say it was satisfying to be able to turn the collar on the shock body without any punch or pry bar, all of the spring tension held in check by the compressor.

And, removing that tension seems to have fixed most of the clunking I was hearing. Where previously I got on the order of 10-15 clunks/day even when I was being careful, on this trip I was less careful and still got no more than 1 clunk each day. 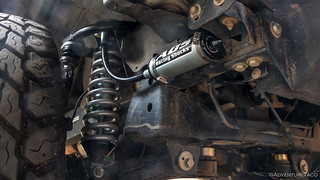 The CVs performed flawlessly on this trip - something I was a little concerned abouts given my surprise when rebooting the passenger side. The boots - as expected from an OEM kit (04438-04021) - are holding up well, and the Moog Universal CV boot clamps that I got for the inner joint are holding just fine. I expect these boots to last for many years, especially since I've taken some of the pre-load out of the ADS coilovers. 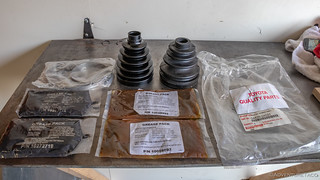 I think I often overlook the little stuff that I take on trips that just does it's job, or that may not be used every trip, but is really handy when the time comes. A few of those things saved the day this time and I think it's worth highlighting their value:

Recovery Tracks - Something to Consider in the Future (?)

I've avoiding getting any type of recovery traction device - like MaxTrax or TRED PRO - because they're super expensive and because I feel like any time I'd use them, they'd be so disgustingly dirty that I wouldn't know what to do with them.

Both of those things would have been true on this trip as well - using a traction board may have even resulted in the board being buried and unrecoverable due to mud suction - but I think they may have gone a long way to helping me get out of the situation I was in, more easily.

So then, the question becomes - are they worth it? For me, I think the answer is still "not yet," but I'm more on the fence than I've been in the past. 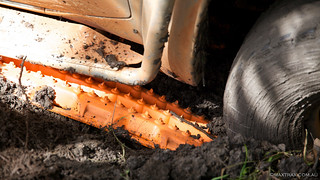