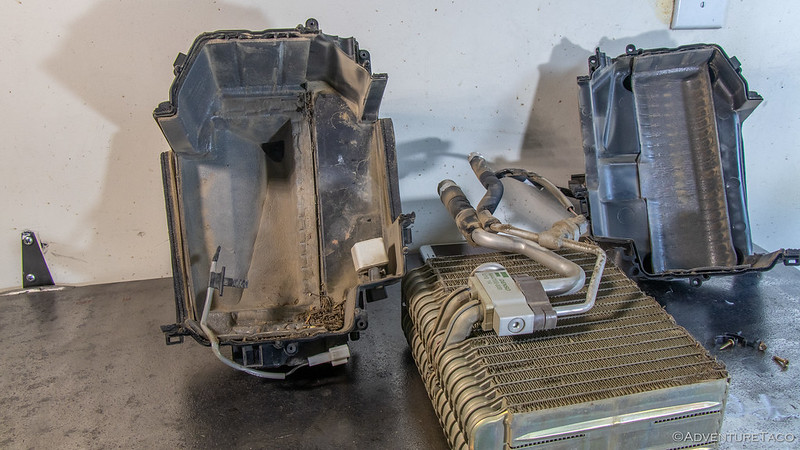 My A/C hasn't worked for the last couple of years and I've finally gotten around to fixing it. That's a story worth reading in itself, and if you're interested, check out It's Too Damn Hot In Here - Fixing the A/C. But, if all you're interested in is how to replace your A/C evap core (and related components) and the A/C Receiver/Drier, then simply keep reading below... 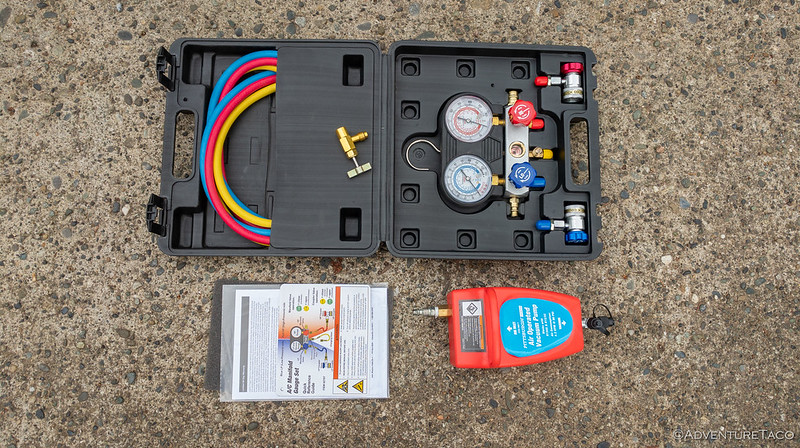 If you're going to replace the Evap Core, you might as well replace all the other components that are in the same housing, since it's a bit of a pain to get at behind the glove box. No need to do the project twice, if you know what I mean! So, you'll need the following parts:

I also did a little looking around online and discovered that any time you replace a component of your A/C system, it's also a good idea to replace the Receiver/Dryer, so I picked up one of those as well: 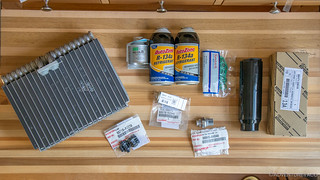 Tools for the Job

My wallet a little lighter, I wasn't done hemorrhaging cash quite yet. I still needed to pick up a couple special tools and some miscellaneous supplies. Still, I'd be well under the quote I'd gotten from Toyota.

Note: You only need these tools if you're going to charge the A/C system yourself. It's easy - and cheaper than the $150 or so to have a shop do it - so I recommend picking these up if you don't have them already: 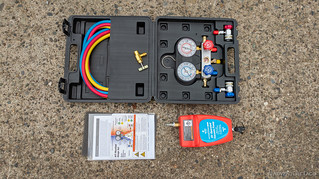 And, you'll need the following tools and supplies regardless of whether you're charging the system yourself:

All that in hand, I could procrastinate no longer!

OK, so I'll start by saying that this job wasn't nearly as hard as I'd made it out to be in my head, nor as difficult as I'd been led to believe by several fellow compatriots. Except for a couple bad-luck moments - the first manifold gauge and evap core I received were both defective - the entire process was reasonably straight forward and fun. Something I totally recommend doing yourself if you know your evap core - or any other A/C component - is on the fritz.

As always, start by disconnecting the battery.

Since I knew I was going to be coming at the A/C system from both ends, I got started in the engine bay, replacing the A/C Receiver Drier. The work in this replacement is actually in accessing the Drier, since you have to remove the grill and headlight.

It's not hard however, and you can see exactly how to do it here: 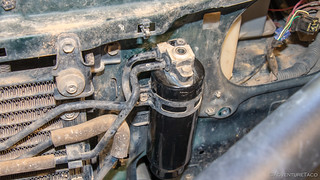 Once you've replaced the Receiver/Drier, don't put anything else back together yet, since you'll want to test the A/C system for leaks before you get all buttoned up. Instead, move on to removal of the A/C evaporator core.

While the majority of the job takes place inside the cab, there are two A/C lines that pass through the firewall. The first step is to disconnect these lines. Use whatever tools you need to in order to do this, as the lines seem to vary from year-to-year of our Tacomas.

Some use a plastic clip on one of the lines A/C Clamp No. 2 (88718-02170), which can be carefully pried apart with a screwdriver after carefully noting the exact position and orientation of the clip for reinstallation later.

Others - like mine - have metal unions. In my case, I used a couple of adjustable wrenches and a 17mm flare nut wrench to loosen the two fittings and then pulled the lines apart.

Note: once you pull the lines apart, plug the ends with paper towel in order to keep debris out of them. 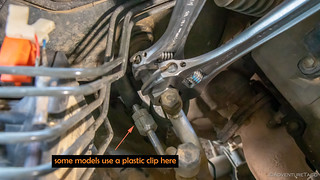 Now, it's time to move to the cab. Start by removing the passenger seat - four (4), 14mm bolts - to give yourself some room to work. 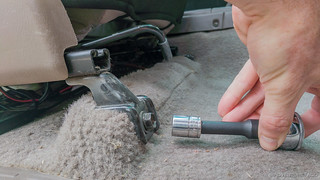 Next, schootch down toward the bottom of the glove box and locate the two Philips screws that secure it to the metal cross-member. Remove those, and then lift out the glove box. 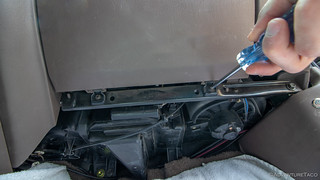 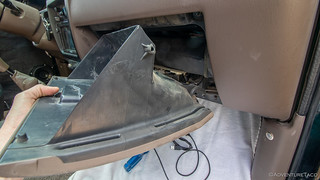 In order to access the A/C evap core, the metal cross-member and A/C duct behind it need to be removed. The cross-member is easily removed with two Philips screws and a 10mm bolt. To remove the A/C duct, slide it left - toward the driver - until the passenger side of the duct disengages and the entire piece can be removed. 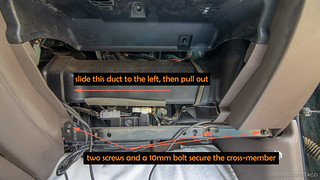 Next, remove the upper shroud of the glove box. There are several steps to this process: 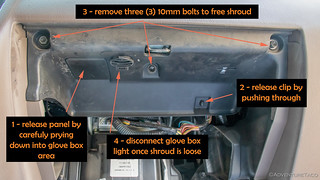 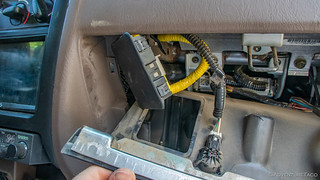 Next, disconnect all of the connectors on the outside of the A/C evap core housing. Different year Tacomas may have different numbers of connectors, but just unplug them all. In my case, there were five (5). 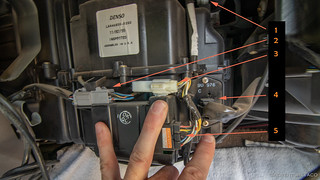 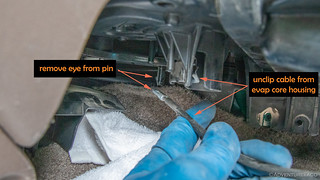 Lastly, remove the bolts that secure the evap core housing to the firewall. There are five (5) of these 10mm bolts. Three are exceedingly easy to remove along the bottom. One is easy in the upper-passenger corner, and one is sometimes slightly more difficult in the upper-driver corner. However, having removed the upper cover of the glove box, all five bolts should be reasonably easy to remove. 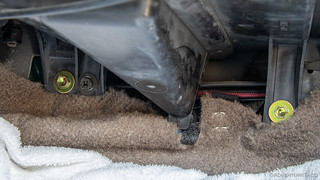 With the bolts removed, carefully pull the evap core housing towards you, pulling the lines through the firewall, making sure the rubber grommets stay in place as the lines pass through them. At this point, the hard work is over! 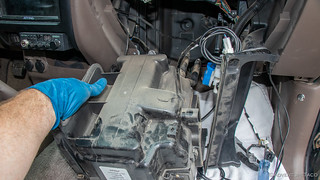 Now that the evap core is out, take it to a workbench and remove the three screws and three metal clamps that hold the two halves of the housing together. Then, slowly separate the housing, cutting the foam weather stripping cleanly at the joint as they come apart. 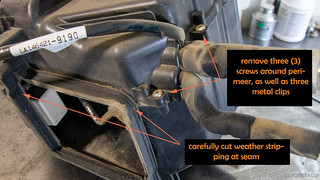 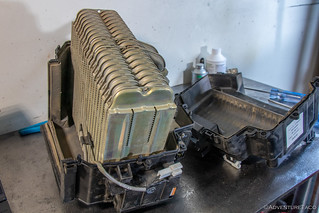 Slide the thermistor sensor our of the fins of the evap core (it just pulls out), and unplug the connector that is attached to the pressure switch. Note where each of these lines pass through the housing. Then, slide the evap core out of the housing. At this point, take some time to clean out the housing - there's likely to be a bunch of debris in it! 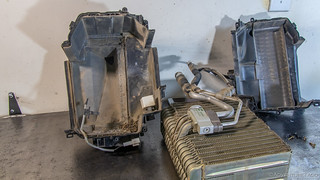 Using a 5mm hex key, remove the two bolts that secure the A/C expansion valve and associated lines to the evap core. These are likely to be quite rusty, and that's OK. 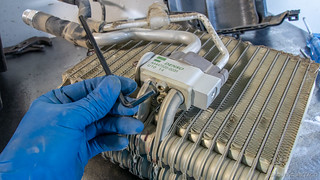 Likewise, unscrew the pressure switch from the high pressure line - using a crescent wrench - and begin reassembly of the system by replacing it with a new A/C pressure switch and a new o-ring from the Santech kit. Do not over tighten the components, letting the o-ring do its job. 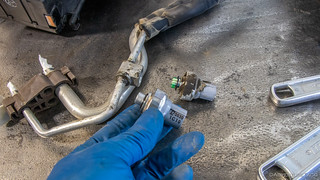 Reassembly at this point is largely - as the FSM likes to state - the reverse order of removal, though there are few points worth calling out.

Once lines have been cleaned and thoroughly dried - by blowing compressed air through them - plug the ends with paper towel to keep them clean.

Next, use the syringe to distribute 40cc (40ml) of PAG46 oil into the new A/C Evap Core, via the intake port. Make sure to do this in such a way that it doesn't drain right out, and then maneuver the evap core to distribute the oil throughout it. This is also the right time to lubricate (with PAG46 oil) and place two Santech o-rings on the fittings that will mate with the new A/C expansion valve and two more (for a total of four) between the expansion valve and tubes. 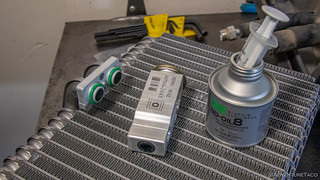 Reinstall the expansion valve and lines using the rusty hex bolts that were previously removed, making sure not to over tighten. The torque spec here is 48 in-lbs. 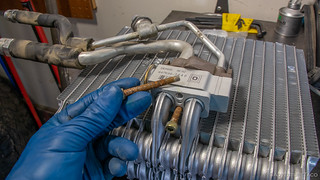 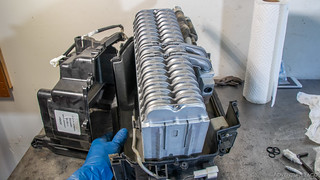 Replace the top of the housing and secure it with the three screws and three metal clamps. 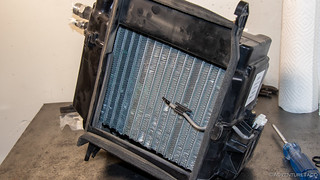 The remainder of reassembly is straight forward, with the following important notes to keep in mind:

If you purchased (or already had) all of the tools mentioned above to do this job, then you're ready to recharge your A/C system. The process takes about 2 hours from start to finish, but a lot of that is wait time - to make sure the system isn't leaking before you fill it with refrigerant. The entire process is outlined here: 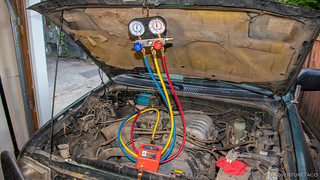 And with that, you're done! Button up anything that's still not put together on the truck pat yourself on the back for a job well done. It wasn't that hard, with the right tools now, was it?